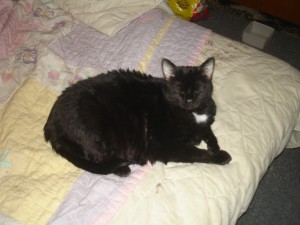 Back in February, a lady wrote to me asking if we could take in her two cats, Midnight and Tiger. Her grandmother was ill and they were moving to a facility that would not allow the cats. Since the boys were in the 6-8 year range, she feared that if she took them to her local “dog pound,” they would just be killed because they were older.

I offered to post the boys on our Petfinder site, as I do for everyone. She sent me photos and something about their images pulled at my emotions. The photos showed a chubby black cat and his tiger striped buddy. They were the most generic of all cat types–their colors the colors of thousands of other cats in need. And to go with their generic looks, they had the most generic names–Tiger and Midnight. How many times had I heard those same names used for tabby and black cats?

But for some reason, I could not get their pictures or names to leave my mind and I kept checking in with the woman to see if she had found them a safe place to go. Sadly, they got overlooked online and no one inquired about adopting them.

In the final few days before she had to move and take them to the pound, I took Midnight and Tiger from her. She didn’t even live in our area. She lived on the East side of Columbus. I never met her in person. I only spoke with her one time after she dropped them off at the Capital City Spay and Neuter Clinic to be evaluated and get updated on vaccines. She wanted to make sure they were okay.

I must thank that woman, because, boy, did she give me two wonderful kitties.

Midnight and Tiger went home with me as my fosters. They were both lovers and it was easy to fall in love with them. Tiger was laidback and quiet, always head butting me and soliciting a scratch on the head. Midnight was a talker. He loved his dinner and he would enthusiastically greet his food as if it was a long lost friend. He was a bit on the portly side, running on thin legs to meet you and ask where you’d been and request a rubdown. His favorite place to hang out was in my bathroom closet in his cup bed. I would come in often to find his head leaned over the side of the bed, eyes closed, perfectly at peace with the world. He would meow at me, lifting his head in greeting, and then go back to sleep.

I loved those boys. They were more special than their photos showed.

I only had the boys with me for a few months. I had worried that no one would want them because they were older and because I wanted to keep them together. They had been pals their whole lives. I could not separate them. They had to be adopted as a pair.

In the time I had them, they both got dentals from Dr. Tom Klein at East Hilliard Vet Services. Midnight, more than Tiger, had a mouth full of problems. He had a snaggle-tooth and several other teeth that needed pulled. I think his poor mouth hurt and after the teeth came out, he seemed to feel so much better.

Everyone who met the boys fell in love with them, as did their new family the Formans. After Midnight and Tiger went to live with Jeff and Monica and their son, I knew they had found their forever people. Monica kept me updated on the boys and donated any unwanted food that they wouldn’t eat to our Pet Food Pantry.

Just about a month ago, Monica wrote me to give me sad and completely unexpected news. Midnight had been having some digestive problems and Monica had been working on his weight and various foods to help him. It turned out that the issues he was having were due to cancer. I was devastated. I never expected anything like that. He had just found a home. I’d put him through all the vet care routine I thought he needed and nothing had showed up while he was my foster. I felt awful.

I asked Monica if I could visit my boy one last time. But sadly that was not to be. This morning, October 20, Monica wrote to tell me that Midnight passed away. 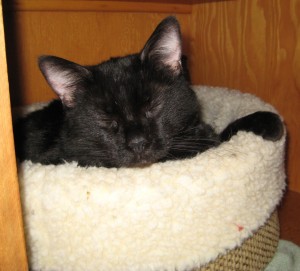 Perhaps that is better. I will always now imagine Midnight, curled up in his little cup bed, eyes closed, happily sleeping, at peace and unafraid. He did not die in a cold, unfamiliar cage at the “dog pound,” crying for Tiger who would not have been with him. Instead, he spent his last days with his friend, loved and spoiled among people who cherished him–the ending all cats should have.

Thank you Monica and Jeff for taking these boys into your life. The Formans had just recently lost another beloved cat and I cannot imagine having to go through this kind of loss again so soon.

Thank you Midnight for the happy memories you gave many, many people who loved you.