A few years ago, my husband, Joe, and I were out on a Sunday afternoon cruise around the back roads of Plain City. We ventured across the Darby into Hilliard and saw a posting for an Open House. The house was very upscale (over half a million in price) and since we had a bit of free time (and were nosy about what you got with a giant price tag), we stopped to investigate.

When we arrived, we were the only ones at the open house. The realtor led us on the tour and as we approached the basement, he pointed to a sign on the door that warned of an alligator inside. I thought it was a joke–that perhaps the family dog was named Alligator or someone was being funny to scare friends.

Descending into the well decorated basement, I saw no signs of an alligator–until I approached an opening about the size of a window, but lacking glass. There was another warning about an alligator by the opening, but being me, I poked my head through to look. And nearly died of a heart attack when an alligator, in a cement room the size of a closet, began to leap around below me. I quickly jumped back.

Joe and I once saw a giraffe in a pen on what looked to be a Waco-type compound near Mechanicsburg. But I’d never been so up close and personal with a wild animal in someone’s home.

Why would anyone want to keep an alligator in their basement?

Tim Harrison, wildlife wrangler and rescuer, asks the same thing in his two books about exotic animal captures and rescues he has made in Dayton, Ohio (yes, Dayton, Ohio, which surprisingly has a very large incidence of exotic animal escapes). Why would anyone want to own a cobra or a tiger or any other creature that could instantly kill you?

I picked up Tim’s two books, Wild Times, Tales from Suburban Safaris and Wildlife Warrior, More Tales from Suburban Safaris at Dark Star Books, an independent bookstore in Yellow Springs (which I love, because they have a black cat in residence). I hadn’t intended to purchase the books, but when I opened them up and began reading of Gaboon vipers (a deadly venomous snake with the biggest fangs in all of snakeland) discovered in garages (and played with unknowingly by curious children) and big cats out for neighborhood strolls, I couldn’t put them down.

The books brought to mind my own experience with the alligator in the basement–an animal that I found to be very sad. Living in a dark, concrete environment, the poor creature saw no sunlight and never swam in a swampy heaven.

I also worried about other pets in the gator house–a cat or a dog, who would jump up on the opening I had looked through and perhaps fall into the area with the alligator. They would have no chance at survival. And neither would a curious child–even I leaned in farther than I should have.

The books also reminded me of the horrible carnage of over four dozen exotic animals that occurred in Zanesville last fall when a suicidal owner release monkeys, bears, wolves, and big cats which were then sadly killed by authorities.

Heartbreakingly, most exotic animals bought as “pets” end up with that same fate–a horrible death.

Tim Harrison, the author of the books I ended up buying, has been going into homes for over thirty years, retrieving escaped exotic animals. From his often sad adventures, he has watched the same type of endings come to many of the animals he tries to save–cruel deaths. Many of the animals are in such poor condition (from being abused by owners who don’t know how to care for them) that they must be euthanized. These rescues have made Tim an outspoken advocate for the wild animals who belong in the wild, not sold to the unsuspecting public who keeps them in back bedrooms or makeshift pens, where they can accidentally kill or harm their owners.

In 2001, Tim and a group of police officers, fire fighters, and paramedics started a non-profit called Outreach for Animals to educate people about wildlife and save both human and animal lives.

Tim also recently spoke in support of Senate Bill 310, which would work to end ownership of exotic animals in Ohio. You can read more about this much needed bill HERE.

In one of the most poignant tales in his books, Tim wrote about going undercover at an exotic animal auction in Mount Hope, Ohio. There he witnessed all manner of animals–kangaroos, panthers, bear cubs–being sold to the highest bidder. Many of these poor creatures were so psychologically damaged that they had no chance of being “saved.” Rather, many of them were destined for “canned hunts”–hunts where exotic animals, hand raised by people and not afraid of humans, are released to be killed and displayed as trophies. Many of these animals, as Tim described, are geriatric, blind, or unable to even walk. They are released and killed. A horrible end to a life of tragedy. After living an unnatural life, these sad animals also die in a pathetic, miserable way.

But auctions aren’t the only place to buy these animals. They can be purchased at flea markets, in local newspapers, and online. If you google for a specific type of animal, I guarantee you can find one for sale. On a web site called, Fauna Classifieds, I found several listings for a gaboon viper for sale (remember, they have the largest fangs in all of snakedom and are deadly–yes, please, I’ll have two!).

In his second book, Tim encourages all of us to be Wildlife Warriors, speaking out for these animals that cannot help themselves. It makes me weep to think of all the horrors animals endure at our hands and all the innocent lives that are lost, both animal and human.

I am not just a wildlife warrior or an animal advocate, I am working each day to be a “species savior” (or I hope to be)–and that includes the species known as humans. Hopefully, we will not become extinct from our own disrespect of nature, animals, and our lovely Earth.

Click on the newspaper article at the top to read more about Tim Harrison and his rescues.

Thank You to Miss SOFIA DINOVO for Giving Up Birthday Gifts and Asking for Presents for Homeless Kitties!! 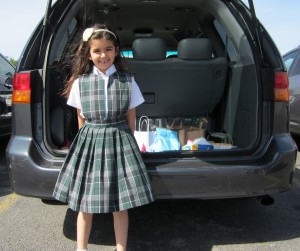 It is not often that I am surprised by people’s generosity and kindness–people are so nice that most things no longer amaze me. But something that happened this week did make me think twice about how compassionate people can be–especially children.

I had an email from a former adopter, Carrie, telling me about something very special her daughter, Sofia, had done. The DiNovo family had just recently adopted a second kitty from us after also having adopted one a few years ago. Because of her love of her furry friends (Norm and Marna, the cats, and some special dogs, too), Sofia had decided that, instead of birthday presents for her seventh birthday this year, she wanted her family and friends to instead buy gifts for homeless kitties.

I don’t know many kids who, at age 7, would forego toys and brightly wrapped packages of goodies. But Sofia did. Instead, her friends brought her bags of cat litter, dry cat food, treats, and toys–enough to fill the back of the family’s mini van.

You can see Sofia in the photo above with all the kitty presents she received for her birthday and then donated to Black and Orange.

Sofia told her mom that someday she wants to be an “animal rescuer,” too.

I just want to send a huge thank you out to Miss Sofia for giving up her birthday presents and so generously helping homeless kitties. I also want to wish her a belated Happy 7th Birthday from everyone, especially the kitties, at Black and Orange.