Pangur Ban, White Cat in “The Secret of Kells” Movie, Stole My Heart. 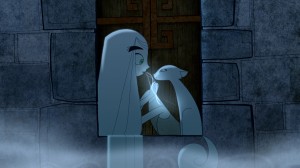 Aisling and Pangur Ban in a scene from "The Secret of Kells."

Joe and I went to see a movie that was listed as part of the Drexel Kids Series. However, although the movie, “The Secret of Kells,” was animated, it was the most gorgeous “cartoon” I have ever seen. The film, which was nominated for an Academy Award in the category of Best Animated Feature, tells the story of Brendan and Irish monks working to create sacred texts in the Abbey of Kells. Of course, the most splendid of these is The Book of Kells, an intricately penned manuscript spilling forth calligraphy and elaborate artwork in the form of knots, spirals, and intricate borders. All of the same artwork weaves its way across the movie screen.

My favorite part of the movie, besides the fairy, Aisling, and the hypnotic drawings (which were done by hand, not computer generated), was the little white cat, Pangur Ban, with one green eye and one blue eye.

Pangur Ban comes from an Irish poem of the same name written by a monk in the ninth century about his little white cat (“ban” actually means white and “Pangur” would have been the cat’s “formal” name). The poem speaks of the monk working on copying words into books while his cat keeps him company–a very similar premise to the movie where Pangur Ban watches over the monks creating The Book of Kells. The last line of the poem relates how the monk is “turning darkness into light,” an underlying theme of the film. To read the complete poem: Pangur Ban poem

You must watch this beautiful scene where Pangur Ban becomes like a wisp of mist and goes where Aisling cannot go to save the hero, Brendan: Aisling’s Song

I promise, you will not be able to get Aisling’s Song out of your head or the image of Pangur Ban out of your heart once you have been drawn into “The Secret of Kells.”

3 Responses to Pangur Ban, White Cat in “The Secret of Kells” Movie, Stole My Heart.