FIXIT Foundation Can Fix Two Animals For Price of One Thanks to Grant! 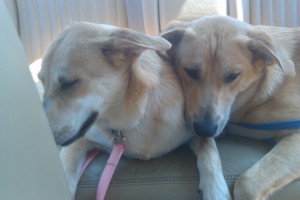 I told everyone about the Get Your Fix web site back in March and I have become addicted to the site. The site was started by the Fixit Foundation after receiving numerous emails from people nationwide who wanted to spay or neuter their pets, but just could not afford to do so. The Get Your Fix site allows people to create a profile for the animal they need fixed and include their story and a photo. People, like me, who want to help get an animal fixed, can put in their zip code and look for animals within 25 or 100 miles from them or anywhere nationwide. Once an animal is chosen, you then make a donation toward the surgery costs. The donation amount is $100 and the folks at Get Your Fix then contact the pet owner and make all the arrangements to get the animal into a vet for the surgery.

For the people in the Columbus area who list cats on the Get Your Fix site, I’ve contacted them and sent them to the clinics we use. Black and Orange then covered the costs since we could fund a spay or neuter for less than the $100 donation.

Most of the animals I have funded personally for surgeries have been dogs, because the $100 donation is very reasonable to spay or neuter a dog, especially a large dog. The two dogs pictured, Zoe and Bo, were dogs I sponsored for my mom’s birthday last month. This photo is of them shortly after they had their surgeries. It makes me feel so good to know an animal will have a better life. And, yes, I fund spays and neuters for family member’s (and friend’s) birthdays. They understand. They know me. They think it is an unusual birthday gift, but everyone so far has loved knowing they’ve helped a dog or cat “get their fix.”

I just had an email Dr. Kellie Heckman, one of the founders of Fixit Foundation, alerting me to a grant from the Shumaker Foundation which will allow one animal to be fixed for free with every paid donation to fix another animal in the same household. That’s a 2 for 1 deal! While funds last, if you sponsor an animal in a multi-pet household on the Get Your Fix web site, a second animal will be fixed for free!

For more information about this super opportunity, go HERE. 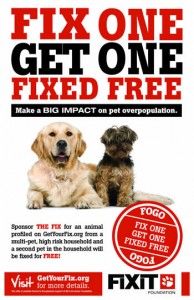 I know I will definitely be taking advantage of this great deal and helping two animals get fixed for my one donation!

Posted in Animal News (other than cats), Cat News, Daily Life of a Rescuer

DogTime is asking people to nominate an “unsung hero” in the world of rescue and animal welfare to receive their 2012 Unsung Hero award. Along with the award, the shelter or rescue that the hero (or heroine) volunteers with will win a $10,000 donation. You can submit your nomination from July 23 through Friday, August 17.

Submit your nomination by clicking HERE and filling out the online form.

We know so many people who qualify as unsung heroes. Our list would stretch for several pages covered with the names of all those who have helped us save kitties in need.

You can only choose one person to nominate, however, and you are limited to that one nomination. The winner will be announced during the online Petties Award Show on Friday, September 7.

And don’t forget to keep voting for B and O as the best rescue/cause blog in the 2012 Petties Blog Awards. Vote once a day, every day through July 31. You can vote by going HERE.

Thank you again to everyone who supports us and aids us in our endeavors to be heroes to the animals.

We Won Best Blog Writing in the 2012 BlogPaws Awards!

We are so happy and proud to let everyone know that the B and O blog won the category “Best Blog Writing” in the 2012 BlogPaws Nose-to-Nose Pet Blogging and Social Media Awards.

To read about all of the winners, go HERE.

Halo, Purely for Pets and Freekibble.com donated 5,000 meals of Halo’s Spot’s Stew to Black and Orange for our kitties for winning this blog contest. We also received a $100 gift certificate to Halopets.com.

We have some very happy kitties thanks to BlogPaws!

Take a look at the very cool award (below) that I received in the mail! I hope in the future that I can attend a BlogPaws conference and maybe take another one of these home! 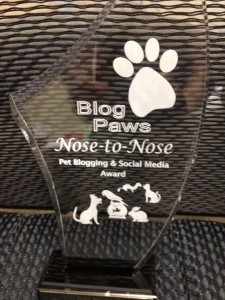 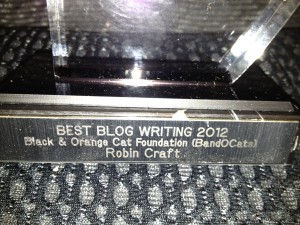 Posted in Animal News (other than cats), Cat News, Daily Life of a Rescuer

B and O’s Blog is a Finalist for a 2012 Petties Award for Best Rescue/Cause Blog! Keep Voting Each Day to Help Us Win!

Thank you to everyone who nominated us as a favorite pet blog for the 2012 Petties Awards. These awards are sponsored by Dogtime Media and are a prestigious award for pet bloggers. Petties are awarded to the top pet blogs in ten categories and each of the winners receive a $1,000 donation to the animal-related charity of their choice. Ours, if we win, will, of course, go to Black and Orange.

We are a finalist in the Best Rescue/Cause Blog category! We only made it into the finals because of all of you who voted for us in the preliminary round!

Now just keep voting to help us win! To vote for B and O to win Best Rescue/Cause Blog, go HERE.

You can vote once a day, every day and the winners will be announced on September 7.

Thank you again for nominating the B and O blog for this prestigious award. We could not have made it into the finals without YOU! Now please help us win by continuing to vote for us!