The Fairbanks FFA will be hosting a 5K Mutt Strutt on Saturday, April 30, from 8 am to 1 pm in Pastime Park (off of North Chillicothe Street) in Plain City. All proceeds from the walk will benefit Union County Humane Society’s H.U.G. (Help Us Grow) Campaign. All dogs must be up-to-date on vaccines and on a leash. Any aggressive dogs will be asked to leave.

Registration for the walk begins between 8-9 am with a welcome at 9:30 am. The walk will begin at 10. At 11:30 am there will be a “Rescue Runway” show of dogs that are available for adoption. At 12 pm a dog costume contest will feature categories including Cutest, Seasonal, and Down on the Farm. The cost to enter the costume contest is $5 and prizes will be awarded to the winners. A trade show of vendors will be open from 8 am to 1 pm.

If you pre-register by April 1, you will receive a t-shirt and dog bandana. The donation to walk is $35 per person. You can also accept pledges.  Registration will also take place the day of the event, but with no guarantees that t-shirts will still be available.

When sending your $35 registration fee, please also include a note containing your name, address, phone number, e-mail, whether you are bringing a dog, and your t-shirt size (S, M, L, XL, or XXL–all adult sizes only). 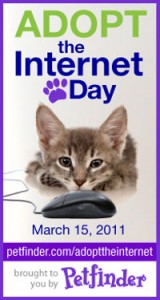 To celebrate their 15th birthday, Petfinder is asking everyone to spread the word online about adoptable pets on Tuesday, March 15.

There are a number of things you can do to help get the word out.

3. On March 15, donate your Facebook photo and status to an adoptable Petfinder pet (preferably a B and O kitty–if you need a photo of one of our adoptable cats, visit our Facebook fan page or email me for a picture you can post–bandocats@columbus.rr.com).  Or you can also pull a photo from the “Adopt the Internet All-Stars” gallery HERE.

Once you have changed your picture, post one of these messages in your status:

More than 320,000 pets are waiting for homes on Petfinder.com. Help Petfinder Adopt the Internet today and find forever homes for as many as possible.

I adopted my pet from Petfinder and now I want to help get this pet adopted! If you want to help pets in need of forever homes, please repost this!

For more information on Adopt the Internet Day, please visit HERE for more ideas, badges to post, and other helpful links.

Ollie the Ragdoll in Need of a Home.

I had an email today about a purebred Ragdoll kitty named Ollie. He is about a year old and is up-to-date on vaccines and is neutered. The owner does have his purebreed registration papers, so he must have come from a breeder.

If you click on the word “Ollie” above, it will open up the flyer about this boy. The owner wrote that he has “exhibited generalized anxiety syndrome, some aggression to petting, status aggression, and fear aggression.”  It sounds to me as if he is a dominate cat who is not getting enough attention.

Furthermore, Ollie “needs a loving home with no small children and other pets should be secure, large animals.” Probably Ollie is picking on other smaller animals and would not be suitable for little kids.

He also “will need lots of play time throughout the day and an owner who has time to work with him.”

I think Ollie just needs to be an only cat or he needs to be with a large dog who likes cats and will not be bullied.  I also think he needs someone to pay lots of attention to him. He is a gorgeous cat and probably has a gorgeous personality for the right person.

“Breakfast at Sally’s” Tells Story of Homeless Man and His Dog, Willow. 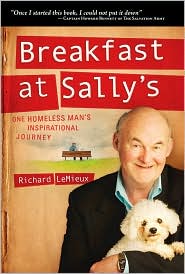 I was having breakfast with my friend, Monica, when she told me about a book she was reading called Breakfast at Sally’s by Richard LeMieux. The “Sally’s” referenced in the title was actually not a diner or restaurant, but the Salvation Army’s soup kitchen. Richard LeMieux’s story chronicled his life living in his van with his dog Willow after losing his home, family, and life.

What intrigued me even further than the inspirational quality of this story was the fact that Monica told me Richard LeMieux was originally from Urbana, Ohio. Having grown up in Mechanicsburg, Urbana was the next town over, the “bigger town” where we went to eat at Pizza Hut or shop at KMart. My husband, Joe, worked in Urbana for many years as a pharmacist in Wal-Mart. I knew Urbana well.

Visiting the web site for Breakfast at Sally’s, I discovered that LeMieux was indeed a native of Urbana, Ohio where he attended Urbana University (I have many friends who attended UU–Joe’s brother even went there), and worked as a sports writer in nearby Springfield at the Springfield Sun newspaper. His homeless stint was not in Ohio, however, but in Bremerton, Washington where he had lived since 1981, working as a publisher until he lost everything.

This link to a town I knew led me on a quest to acquire the book and read it.

And I was not disappointed.

While the book does have many sad moments, it is a very positive book about the value of all human beings and animals, as well as the value of hope. Richard LeMieux was on a bridge, contemplating suicide, but could not force himself to do it, because he feared what would happen to Willow. That is the power of unconditional love, of animals in our lives. When no one else will see your value or love you, a dog or a cat will.

My friend, Monica, helps at the Vineyard Church in Plain City the last Sunday of each month. Through our collections with the Pet Pantry, she takes dog and cat food to distribute to the many people who come seeking a meal or basic care items such as tooth paste and soap. She said they always run out of pet food and she has watched people cry knowing they will be able to feed their beloved fuzzy friends.

There are many people who call me looking for a bag of cat or dog food–just enough to get them through another meal so their animal companion will not be hungry. After reading Breakfast at Sally’s, I will try even harder to make life a little easier for people (and their animals) who may be on a journey I would never hope to travel.

Posted in Books and Odds and Ends 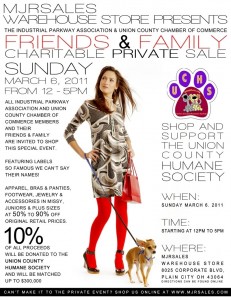 On Sunday, March 6 from 12-5 pm, MJR Sales, located at 8025 Corporate Blvd. off of Industrial Parkway in Plain City, will be hosting a special shopping event to benefit the Union County Humane Society’s “Help Us Grow, H.U.G.” program. Prices at the MJR Sales Warehouse Store are discounted 50-90% and at this special sale 10% of the proceeds will be donated to help the shelter expand. MJR Sales will match up to $300,000!!

If you can’t actually make it to the sale, you can also shop online: www.mjrsales.com

Help the Union County Humane Society raise money to fund their expansion, which will allow them to help even more animals.

Click on the flyer to the left to enlarge it, print it out, and pass it along. Or email this link to a friend who likes a bargain. The more people who shop, the faster the humane society can begin their new shelter renovation.