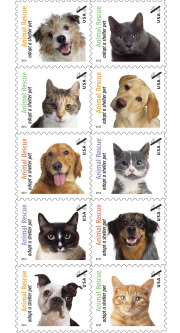 I am absolutely thrilled about this! Thanks in large part to Ellen DeGeneres and Halo, Purely for Pets, a company that she co-owns, the Postal Service is producing a series of stamps encouraging people to adopt a shelter or rescue animal. The stamp series is called “Animal Rescue: Adopt a Shelter Pet,” and will be the post office’s 2010 social awareness stamp set. Along with DeGeneres and Halo, the Postal Service is promoting this campaign called “Stamps to the Rescue.”

The stamps, which feature five dogs and five cats, all of which were adopted from a shelter in New Milford, Connecticut, can be pre-ordered today at the Stamps to the Rescue web site, at usps.com/shop, or by calling 1-800-STAMP24 (1-800-782-6724).

In addition, Halo will be donating a million meals to animal shelters around the country to give these often forgotten animals a “First Class meal.”

Please check out the Stamps to the Rescue site. The very cool web site has information about each of the animals featured on the stamps (all who found wonderful homes) and explains why adoption is so important to end the euthanasia of millions of healthy shelter animals each year. While you are on the site, you can even print out an adoption certificate to commemorate the addition of a new companion to your family. There is even a link from the site to Petfinder to make finding your future companion even easier.

In the past the Postal Service has taken on other social issues such as children’s health, Alzheimer’s, breast cancer awareness, organ and tissue donation, literacy, and philanthropy. They also featured stamps with a puppy and a kitten on them in 2002 to promote “Neuter or Spay.” With this large campaign in place, Ellen, Halo, and the Postal Service will surely educate more people on the need to adopt, stamping out the deaths of thousands of worthy and lovable cats and dogs.

Lucas, an orange tabby, was cold and hungry before he made his way to a shelter. Lucky for him, he got great vet care and a new home!