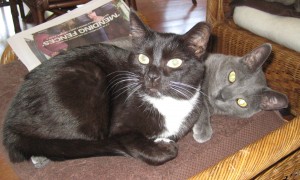 Nicky and his best bud, Sadie

Nicky was royalty.  Named for Czar Nicholas, because he was a Russian Blue, the quiet, gentle, gray cat, who managed to slip in to all our hearts, silently slipped away from us last week. Nicky died because his heart was just too big.

Nicky was one of several kitties that our foster, Debbie, called her little “artists’ colony.” When she found them at a local metro park, deserted because the house they were living in was slated to be torn down, they were the starving artists. But with Debbie’s work and love, she turned Nicky and his family into happy, content, and well fed cats.

Nicky was a gorgeous cat with big eyes and soft fur.  He had a love of toes and was constantly brushing up against feet. Debbie said he was the cat with a foot fetish.

He was only about two years old and his best friend was little Sadie, who may have been a litter mate or cousin.  Sadie and Nicky were always together–cuddled up in a chair, sleeping on a blanket.  When one of them went to PetSmart to try to be adopted, both went, because we wanted them to be adopted as a team.

And yet, although we had numerous applications for Nicky, although he and Sadie went to PetSmart off and on over the last year and a half, Nicky never did leave Debbie. Not until last Friday.

Nicky and Sadie had been in the cage space at PetSmart for just over two weeks. They had started out in separate cages, one on top, the other on bottom.  But they both seemed so depressed without each other that a volunteer, cleaning the adoption center, put them back together in one cage.  They were quite content after that.

On Thursday, October 15, the volunteer who was doing the weekly evening cleaning in the adoption room, called to say that Nicky was breathing in short gasps. Debbie hurried to get him, thinking both he and Sadie were stressed from being at PetSmart and needed a break.  She took Nicky home, gave him treats and some food, and he seemed to be breathing easier.

Getting up to check on him later in the night, Debbie discovered that her beautiful gray boy had finally gone to his forever home.

Debbie had an autopsy done on Nicky to see what caused such a young cat to die. It turns out Nicky had the equivalent of congestive heart failure.  The left side of his heart was enlarged and was working as hard as it could, but it could not keep up and fluid filled Nicky’s lungs.  Our Nicky’s heart was just too big for his little body, was working too hard.

I thought about why such a beautiful, happy, and sweet cat never got adopted, why he kept waiting and waiting for someone to take him home. I think I know the reason. Czar Nicholas didn’t want to leave Debbie.

He had found his home.

Nicky and Sadie, inseparable in life. 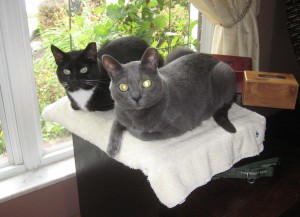 Posted in Our Kitties that Found Forever Homes, Over the Rainbow Bridge