A Very Special Kitty with a Special Need: Benjamin, AKA Butter. 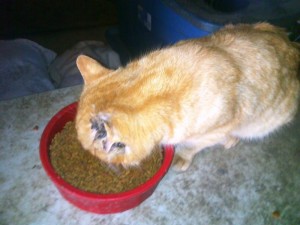 At the beginning of March, the lady who had helped Exodus (the FIV positive kitty with the broken jaw), sent me an email and a text about another kitty who showed up needing emergency vet care. With her text was the photo above showing Benjamin (aka “Butter”) and his awful looking left ear. I immediately took one look at the picture and arranged to meet her.

Benjamin went to East Hilliard Vet Services to have his ear fixed. Much of the ear was missing and what was still there was very infected. The smell from the carrier was so grotesque, I thought I would gag. It was Benjamin’s poor ear that was giving off the awful smell and I wondered how he had survived.

We are not certain what happened to the ear. We think Benjamin was probably attacked by something that ripped away the top of the ear and then the rest became infected. Whatever happened, it had to have been very traumatic and extremely painful for this little guy.

I thought that Benjamin would end up without an ear after everything was done. There wasn’t much left and what was there was very fragmented and jagged. 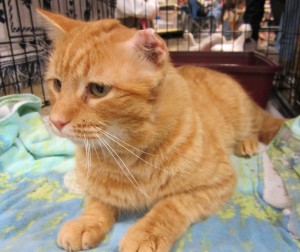 But thanks to Dr. Tom and Dr. Chris and a wonderful vet student, Dr. Missy, Benjamin ended up with a very short and stubby ear. His left ear is about half the size of his right ear, but it is shaped like an ear (with a slight curl at the top). We think his new ear makes him look very handsome!

Whatever attacked Benjamin may have nearly taken his ear and also given him FIV, feline immunodeficiency virus. This is the same virus that Exodus had, so perhaps it is being transmitted by another cat at the location where Benjamin and Exodus came from. In any case, both cats from the same place were infected.

Many people (and vets) freak when they hear FIV positive. A lot of shelters automatically euthanize cats that test positive for this virus, because there are so many negative cats that also need homes. But the truth is, FIV positive cats can live very long and healthy lives and the virus is very hard to pass on to other cats. People just need to understand that these cats are also perfectly suited to being adopted and added to their families. There are too many stereotypes that need to be overcome with education.

The virus is only spread through deep bites and these typically only occur between un-neutered male cats. Benjamin is neutered and he is also a very, very docile and gentle cat who is not aggressive in any way. He likes other cats and could be adopted with a negative kitty who was also very laid back and sweet. Two cats that do not fight are not going to pass the disease.

Cats with FIV can also live long lives. While their immune systems may be a bit weaker than other negative kitties, that does not mean they are going to die young or live horrible, sickly lives. They should be kept indoors and treated for any problems that arise, but that is how we want people to treat their cats anyway, whether they are positive or negative for FIV. 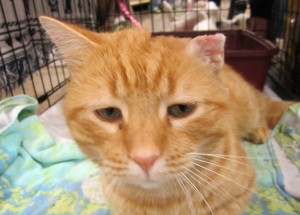 There are several nice articles about FIV on the Best Friends web site. You can access those HERE and HERE. You can also read a Fact Sheet about FIV HERE.

Exodus went to Best Friends Animal Society in Utah last October, because I could not find anyone who would look past his FIV status and adopt him. But that was a very special case and I am certain Benjamin can find a home here in Ohio with an open minded person.

Benjamin is a lovely cat. He is dog-like in his personality, following you around and loving a good rubdown and scratch. He is very, very laid back and was a perfect angel during the time he had to be confined to a large dog crate so he could heal. He never made any messes or trashed his cage. He just patiently waited for “stretching time” and his meals and belly rubs. He loves everyone he meets.

Benjamin is only 2-3 years old. He has the wonderful orange tabby personality and has never met a stranger. This sweet, special boy with the tiny ear and the virus many people fear, truly deserves a home where he will never struggle to survive again. Please open your heart and your mind and let Benjamin into your home.

If you would like to adopt Benjamin, please go to our web site, www.bandocats.org and download an adoption application under “How you can help” and “Adopt.” Once you have filled it out, either email it back to us at bandocats@gmail.com or fax it to 614-873-0972.