Why I Don’t Attend the Circus (Except Cirque Du Soleil)!

Everybody loves a circus, right? A harmless afternoon or evening of fun?

Wrong. I don’t enjoy the circus and I really don’t think the animals that are forced to perform do either. And that is why my husband, Joe, and I will not be attending the circus that will be in town in May.

The Culpepper & Merriweather Circus is coming to Plain City on May 11 for two show times. The way this circus works is that they tend to pick smaller villages or towns to visit and get chambers of commerce or local schools (schools mean field trips and lots of children) and organizations to sponsor them. Then those groups sell the tickets for the circus in advance and receive a portion of the ticket sales. It is billed as a fundraiser. The circus moves from one small town to the next. On May 13, they will be in Johnstown.

With them will be several animals who did not decide, of their own free will, to “run away and join the circus.”

Many, many circuses are moving away from animal acts because the animals are made to perform using deprivation or punishment to enforce behavior. From the Culpepper and Merriweather web site, this circus uses a dog and pony show, trained birds, and camels. They do not mention having big cats, but on several other sites, I found evidence that they have performing tigers and lions. They no longer use elephants, as elephants are often the animals that lead to the most citations of cruelty for circuses and can produce the most risks if they escape–which two elephants did from this circus in 2008. Another elephant escaped in 2009 and was involved in a collision with an SUV.

Going back to 1991, Culpepper and Merriweather has been in trouble with the U.S. Department of Agriculture (USDA) on numerous occasions for failing to meet the standards set forth in the Animal Welfare Act. You can read a fact sheet on these citations HERE.

Read another opinion about this circus HERE.

Tons of groups that promote animal welfare, including the ASPCA, ask that people not support an industry that harms animals. They ask those who care to NOT attend circuses that still use animal acts. Read the facts about animals in circuses HERE and HERE and HERE. These are just a few of many sites. Just Google “Circus Cruelty” and watch what comes up.

I realize that many people reading this may not have known that circuses are cruel. This blog was meant to educate and make the readers think. Children love animals and circuses are billed as fun places where kids can view exotic species they don’t see in their own back yards. But circuses promote lives of misery. Here is a quick list of things to think about: 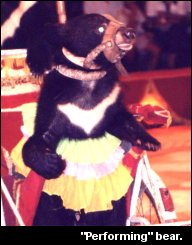 1. If you’ve ever taken dancing lessons or tried to balance on one leg for a long period of time, you know how hard those things can be. Now imagine you are a wild animal that never, ever would do those things in real life. How difficult do you think it is for an elephant or a lion to attempt those feats? The only way to get them to do it is with punishment. Would you really want to do something just because you were afraid–terrified someone would beat you or hurt you?

2. How would you like to be crammed in a tiny space for hours upon hours in a day, traveling from one town to another every week of the year? You’d get tired and so do the animals. When the animals finally are let out, it is to do embarrassing tricks that they don’t want to do.

3. What if you were deathly afraid of another type of animal (I don’t like snakes and there is no way I would work with a venomous snake each day of my life)? But, too bad. Every day, you are FORCED–yes, forced (no one gives these animals a choice), to work with another animal that could eat you. Often horses are trained to have lions ride on their backs. Horses are prey animals. Big cats are predators. It is against their natures to be together. You can imagine how terrified the horse is every time it is forced to allow that lion to get on its back–a position that would normally lead to the lion killing it.

4. These animals are majestic, awe inspiring creatures. They deserve our respect and our compassion.

There are a number of circuses, including Cirque du Soleil (which I have attended), that do not use animals to entertain–only humans who chose that life. To see a list, go HERE.

Please think about these things before you attend a circus with animals.