Free Animals Come at a Cost. 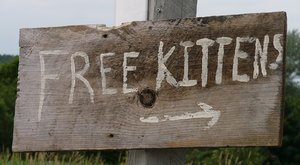 These notices pop up everywhere. In newspapers. On bulletin boards. On the internet–especially on Craig’s List.

People won’t give away their old junk, holding yard sales to sell their attic and basement “treasures.” Yet, they will give an animal, a living, breathing, feeling creature, to someone, even a stranger who they know nothing about, for free.

I used to see lots of “Free kittens” signs posted in yards or at the end of driveways, especially in the spring as we entered another round of “kitten season.” I don’t see the signs quite so much any more. At first, I thought maybe our spay and neuter efforts were making a difference in our area. But the more I thought about it, I came to realize that the real reason for the decrease in homemade signs attached to mail boxes is because people are so technical now that most of them advertise their free animals to a much larger audience on the internet. Why only catch the attention of a neighbor or the local house wife driving on errands when you can reach out to people all over a metropolitan area or even a large portion of your state?

Where are these good homes the puppies and kittens and other unwanted animals go to? Well, some of these “good homes” are research labs. Known as “bunchers,” there are people who actively acquire as many “free” animals as they can to sell to laboratories. These people make a profit and a living by selling animals into a life of untold misery, suffering, and eventual death.

They are called “bunchers” because they take animals in “bunches.” Most people are only willing to adopt a single animal. But the bunchers are eager to take three kittens, four puppies, or even whole litters (mom included). Usually, it is hard to find anyone who wants the animals, but suddenly there is a person who wants to take them all off your hands. That is when you should be suspicious.

There are other people in the world, too, besides bunchers who acquire free animals. These include people with mental disorders, deviant personalities, and other bizarre behaviors who take free animals for their own purposes. I have dealt endlessly with several people who acquire free animals from Craig’s List when they are in a manic mood. One lady only looks for purebreds–Siamese, Persians, pugs, a Yorkie. When she becomes depressed, she forgets to feed the animals, letting them live in their own filth, reproducing and creating more unwanted animals, until I either remove them from the situation or they die before I am informed.

Some of the people acquire the animals as “food” for their exotic pets–crocodiles, snakes, and other wild animals that require a steady diet that must be provided to them when they are housed in an apartment bathroom and cannot “hunt” on their own.

Some take free animals to become “bait” for fighting dogs. These poor free innocents are used in horrendous ways to teach other animals to fight for their lives.

So how do you make sure a cat or a dog (or even a rat or a bunny) goes to a good home?

We often post cats for people on our Petfinder site. Petfinder.com is a wonderful site that allows rescue groups, shelters, and individuals to post homeless animals for a national audience. Animals cannot be given away on this site. When we post for someone as a “courtesy,” we then screen anyone who applies to adopt the cat, ensuring that the animal will go to a good home. Even after we’ve checked the person out, however, calling their vet and references, I always tell the owner to charge a fee, as well, and even go to the house and visit where their animal will be living.

I learned all of these things about free animals the hard way.  A few years ago, before I was involved in animal rescue, someone dropped off a mother cat and four kittens at my house. I tried various avenues to find homes for them, but with no luck.  Someone advised me to take the kittens to a Columbus pet store.

I cringe now at the thought.  In fact, I can hardly bear to write this.

The pet store sent me next door to the clinic that checked out all their animals.  One of the kittens had a cold in his eye.  Because of this, all of the kittens were deemed too sickly to be taken for sale in the pet store.

Instead, just as I was headed for the door, one of the ladies in the office stopped me.

“One of the girls who works here wants some kittens for her parents’ farm,” she said.  “Should I call her?”

I nodded my approval.

She went in the back and made a phone call.  She came back out to tell me the girl would take all four kittens for her parents’ barn.

I didn’t ask any questions.  I didn’t get a phone number or name or anything.  I just handed those kittens over to a complete stranger.

At the last minute, I decided to take the kitten with the runny eye home with me.  I was afraid he wouldn’t receive medical treatment for his eye and would go blind.  If I had those worries, why did I give up his sisters?

I saved the runny-eyed kitten’s life.

I feel almost certain that I gave those poor kittens to a buncher.  I can only imagine what kind of horrors they have been subjected to because of my stupidity.

I tried to call back later to check on the kittens, but no one in the office could tell me anything about them.  It was as if those free kittens never existed.

I read Jim Willis’ essay about “Free Kittens” a few months after this happened. In the essay, a litter of free kittens are given to various bad homes.  Some end up in research labs.  Others go to uncaring owners.  But they all end up dying in their “good homes.”  Reaching the gates of heaven, God tells the joyful bundles of fur, “You are finally free, kittens.”

Notice how the placement of a comma changes the whole meaning of “free kittens.”

If you’ve never read Jim Willis’ amazing essay, “Free Kittuns,” please have a tissue ready. You can access it HERE.

The only true way to end the suffering of animals given away for free? Spay and neuter. If there are no unwanted litters then, eventually, we will reach a day when there is a short supply of animals and no one will dare toss them out like discarded garbage. I dream of a day when animals will be so valued that people will gladly pay any price to have that adorable kitten or elderly dog in their life.