Update on Bowie, Who was Sasha, and is Now Harley: The Husky Who Fell Out of Her Old Life In To Better Days. 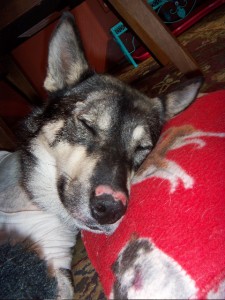 This past week has been full of ups and downs. I couldn’t really tell anyone much about the condition of Bowie the Husky, because there were too many unknown factors. But with a text from Dr. West that said, “100% our doggie,” I am free to fill everyone in on the panic we’ve been feeling over our husky girl who fell from the back of a pick-up on to Interstate 70 (you can read Part 1 of her story HERE).

Just a quick synopsis: last Friday, September 2, Dr. Kim West was on her way to the Franklin County Humane Society to pick up a dog who was slated to be euthanized. On her way, she rescued a young husky who was riding in the back of a pick-up truck and was thrown out on to I-70 East. Dr. West took the dog (who she named Bowie) to OSU vet hospital where Bowie’s right front leg was amputated.

That is where we left you hanging and where all our troubles began.

On Monday, Bowie was released from OSU in to foster care with a dear friend, Caroline (several years ago Caroline took in a Plain City dog who was in desperate need of a home and we love her for spoiling “The Moo”). The Chief of Police of Dublin was interested in adopting Bowie. All awesome news for our sweet girl.

However, on Tuesday, things began to go wrong. On Tuesday, we discovered that Bowie’s owners had come looking for her. While, at first, we thought this was a good thing–they had missed her and wanted her back–it quickly became apparent that Bowie’s situation might change for the worse if she returned to her former home.

As you know, we had been fundraising to pay Bowie’s bill, which came to over $2700. With the arrival of the owners, the bill was transferred over to them. We still wanted to help another animal in need, like Bowie, so we planned to donate what we had raised to the Good Samaritan Fund at OSU.

However, while the owners at first said they could make payments, they later backed out. 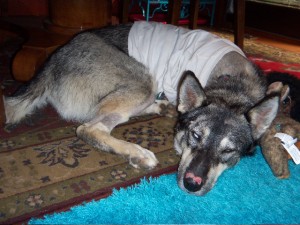 Bowie, in the meantime, was having a difficult recovery period. Caroline was keeping her in a crate most of the time, allowing her to get out to use the bathroom and to stretch for brief moments. But sometimes, Bowie wasn’t able to get up very well and would have accidents. Caroline was cleaning her up and keeping her quiet and sleeping beside her to make sure she was okay.

The final event came when OSU spoke with one of the owners and told them that even if the bill was wiped away and they did not have to pay it, Bowie would still need a ton of rehabilitation and further vet care. There would be a lot more costs.

The owners could not assume this type of financial responsibility. They also told the vet on the phone that Bowie was an outside dog and they could not keep her in their house to recuperate. Thankfully, they then relinquished ownership of Bowie to OSU. 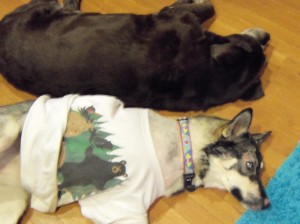 Dr. West called me with the wonderful news that Bowie was ours! She said OSU wanted to wait twenty-four hours to make sure the owners did not change their mind. So, with the text, “100% our doggie,” I knew Bowie was never returning to her old life.

Bowie still has a rough road ahead of her, but she now has tons of people who will ease her troubles. She is not spayed and she must be tested for heartworm. Dr. West plans to get these things done in the next month when she has healed more. She will need rehabilitation and patience and further care for her injuries.

But as soon as Bowie leaves Caroline and The Moo, she will be going to her new forever home with the Chief of Police of Dublin, where she will get a new name (Harley) and a new life.

Finally, I also want to tell everyone thank you for your care and generosity. We have raised almost $2,000 toward the total vet bill. OSU originally pulled the money for Bowie out of their Good Sam Fund. We did not want to deplete that fund, however, in case another animal needed help in the future and we were not there to fundraise. So we are going to try to pay every penny of Bowie’s bill and allow the money to be there for the Bowies of the future! We could only do that, because of you. Thank you, thank you!

4 Responses to Update on Bowie, Who was Sasha, and is Now Harley: The Husky Who Fell Out of Her Old Life In To Better Days.