I previously told everyone the story of my friend, Cynthia, who found two abandoned kittens by the side of the road just a short walk from her house. She named them Simon and Peter and began taking care of them. A few weeks after she had them, a stray tortoiseshell female cat showed up and pushed her way into Cynthia’s house. Strangely enough, this thin, starving, pushy female was the mother to the two kittens. Somehow, she had hunted those babies down and forced her way into Cynthia’s good graces to be reunited with them.

Maggie, the mom, was very happy to be back with her lost kittens. You can read that earlier story HERE.

Since that story, little Peter, the orange kitten became very ill and did not make it. So it was just Maggie and Simon. Poor Simon was very lonely without his brother to play and wrestle with. Although he had his mom, she just wasn’t as rambunctious as his playmate sibling.

Maggie and Simon have been to the vet, in the meantime, and are now spayed, neutered, vaccinated, and looking for a new home (although, Cynthia assures me they can stay with her as long as needed). I thought this was where the bizarre story ended, but Cynthia wrote me on Friday with another strange tale.

Cynthia emailed me and said that she had begun to question her sanity with Maggie and this litter of kittens of hers.

Here is the odd situation Cynthia recounted to me.

Cynthia had laid down to take a nap, little Simon curled up beside her on the bed. After she woke up, her neighbor came over and said she was returning Simon, who she had been “kitty-sitting” all afternoon while Cynthia was asleep. Cynthia wondered what in the world the neighbor was talking about since Simon had been napping with her. And then the neighbor produced a little black and white kitten that was an exact duplicate of Simon!

Where did this little guy come from? Cynthia keeps a close eye on all the cats in her area and this was the first time she had ever seen this kitten. He was friendly and socialized and seemed perfectly happy to be around people. How had he survived? Who had been feeding him and keeping him safe? How could he just appear and look so much like Simon? He has to be Simon’s brother. They are perfect mirror images. Except…mom Maggie wants nothing to do with him and hisses non-stop at the little guy.

Simon, though, is pleased as punch with this new friend. The two have already become best buddies, playing and curling up to sleep side by side. After losing his brother, Peter, Simon now has a playmate and companion. Which led me to wonder if little Peter had not come back in another form to be with his brother again. Spooky! But, also, a sweet thought. The photo Cynthia sent (at the end of this posting) of the two asleep, bodies connected, makes me think there is some strange connection with these kittens.

In any case, this little twin will be taken care of, too, and will give Simon the wrestling pal he was missing. 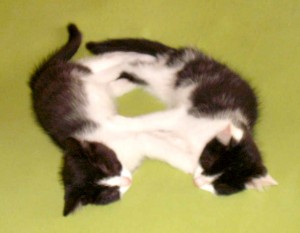 3 Responses to The Twin.