Sometimes I am so Disappointed in People. 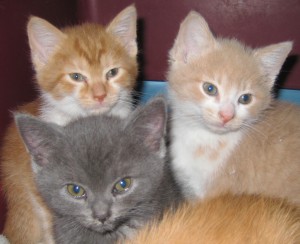 Charley is the little orange and white tabby in the back left. This is from 2008 before he was adopted. He was a sweet, socialized, happy kitten.

Last Saturday when I got to work, I had a voice message on my phone from Capital Area Humane Society. The message was from the admissions department. Sometime on Friday, a woman, J.K., surrendered a cat to the shelter. This cat (now named Charley) was formerly one of ours. J.K. told them she had adopted the cat as a kitten from our organization. Capital wanted to know if we would take the cat back or if we wanted them to do their evaluation on the cat and decide what to do with him.

I was utterly furious at this woman. On May 6, I had an email from J.K. stating that her 7-year-old son had developed allergies to Charley and they needed to surrender the cat. She said she had been trying for six weeks to find a home for the cat who they had had for two and a half years. Although, she said she had contacted every no-kill shelter and rescue organization in Franklin County, this was the first correspondence I had had from her about Charley. Part of our adoption contract asks the adopter to contact us if there is a problem with keeping the cat. We always try to work with adopters to find a solution even if we don’t currently have foster space to take the cat.

J.K. said she had been boarding the cat at her vet’s office, because her son’s allergies had become so severe. When I saw that the issue was allergies, I quickly wrote her back the same day, May 6, and told her all the options available for keeping a cat while dealing with allergies. The best solution many of our adopters have found is regular grooming of the cat. If you give the cat a bath and wash away the dander, there usually is no issue. We’ve had many, many adopters tell us that this works.

I asked J.K. to try several of the things I suggested and to also send me photos of Charley for our Petfinder site, so we could post him and begin looking for another home if she decided that was her only recourse.

I heard nothing more from J.K. and thought that my suggestions must have worked.

And then she took Charley to Capital.

I called and left a message telling the Admissions department that we would take Charley back. Because they had called me the day before, I worried that they had already euthanized the cat. Although Charley was young, only 2 and a half years, and a friendly orange and white tabby, I still feared that if they were full, they might just euthanize him before I got there.

I also called and left J.K. a message. I pulled out her old adoption application from December 2008 and found her number. I was so angry when I left the message that my voice was shaking. Why had she not contacted me when she decided she was done with Charley?

After work, I hurried over to Capital to retrieve Charley.

When I gave the woman in Admissions my carrier and told her I wanted to get Charley, she said he had a carrier in his cage with him and she would just try to get him to go in that carrier. She did not think she could pick him up and put him in my carrier as he was very “angry.”

Now I was confused. What was going on? Charley (who we had called Jerry) came from a litter of five kittens who were very, very social and loved people. He was only four months old when J.K. and her five-year-old son adopted him. J.K. felt her son was finally old enough for a pet and he had been begging for a cat. They told me a story of how they had both dreamed of an orange kitten and when they saw Jerry/Charley on our web site, they knew he was the kitten of their dreams.

The woman at Capital brought Charley out from the back room and he was hissing and growling inside his carrier. I thought he was just traumatized and upset from being at Capital with all the noises and smells.

The admissions woman informed me that Charley was slated to be euthanized because he was “not a nice cat.” He had been swatting at everyone and appeared aggressive.

Again I was confused. I asked her if J.K. had brought in any vet records that I could have so I would not have to re-do anything that he had already had done. The admissions woman told me that J.K. had not brought any records, but she had told them Charley had just received his vaccines on May 3 at her vet’s office where he had been boarded. Capital had called the vet’s office to confirm this and the office was furious that J.K. had taken Charley to Capital. She had just picked Charley up from boarding that morning and they thought she was taking him home or had found a safe place for him to go. She did not tell them that she was taking him to Capital.

I left with Charley, thinking that he would settle down once he was away from the shelter and knew he was safe. On the way home, I also called the vet’s office and asked if they would fax me Charley’s records. The receptionist was thrilled to hear that I had taken Charley from Capital. I asked her if he had been aggressive with them. She said he had been in a cage for almost three weeks and was very anxious and upset from being away from home. She said he did hiss and growl at them, but she had been able to pet him after working with him for a bit.

What had happened to this cat?

When I got Charley home and into my spare bathroom, he refused to come out of his carrier, so I left him alone to settle in. Each time I came in to check on him, he would give a high pitched scream, growl, and hiss at me. When I finally persuaded him to come out, he approached me as if he wanted to be petted. When I did pet him, he tried to bite me and swatted at me with him paw.

I tried petting him several more times and at some point along his back, I would hit a spot that would set him off and he would screech and try to grab me with his paw or his mouth.

Chaplin now in my bathroom.

This cat, from all appearances, has been abused. He is definitely angry. He is scared and does not trust people. He has been hiding in my bathroom closet and each time I come in the room, he crouches down, backs away from me, hisses, growls, and tries to hit me with his paw.

There was more going on with this cat’s surrender than a little boy with allergies. What had these people done to a loving, sweet kitten to make him into this aggressive cat? Had someone been hitting him or harming him in some way to make him so distrustful?

I will never know, but something horrible happened to this boy.

On Monday, I had an utterly nasty email from J.K., which I bounced back to her. I do not want any other communications with this woman. She basically blamed me for everything and told me that my phone message was “harassment.” I have added her to the “Do Not Adopt” list that I keep for B and O. If any other rescue groups would like her information, I will happily give it to them, but I doubt she will ever have a companion animal again in her life.

I am working with Charley to see if I can make him trusting again, can make him into the sweet kitten he was when he left us. I hope I can. He has come along a bit, allowing me to pet him and soliciting rubs. But sometimes something still sets him off and he will try to bite me or attack my legs–not in a playful way, but as if to defend himself. It appears that someone had been kicking him–he is extremely fearful of feet. I keep telling him “NO” when he does these things and he stops, but it is going to take a lot of love to bring this boy around and make him feel safe.

Charley, who I’ve renamed Chaplin to give him a fresh start, is safe with me for now.

Stay tuned for Part 2 of this story of disappointment about another cat named Charley who was returned to us just a week later by another owner with the initials, J.K.

Posted in Daily Life of a Rescuer

3 Responses to Sometimes I am so Disappointed in People.