At the end of April, my friend, Cynthia, called me in a panic. She was walking back to her house and found two tiny kittens in the ditch. They were both healthy, although the smaller orange fluff ball had crusty eyes. Cynthia called me to get advice on what to do with them. She did not think they had been dumped. She just thought that perhaps the mother cat had been moving them and dropped them, planning to return, but getting sidetracked. Cynthia was afraid to leave the kittens where they were because within a few hundred feet there were two large chained dogs that she feared would kill the babies. So she scooped them up and took them down the hill to her house.

Cynthia set the kittens up in their own little kitten “play land” and took care of them.

A few days later, Cynthia was talking to a neighbor who told her about a mother cat that had babies under a shed. The neighbor warned that her husband was going to shoot the cats. Cynthia asked her to please not do that and to let her know where the cat and babies were. She figured this was the mother to her two little ones. The woman had reported that there were two babies still with the mom, but she thought there had been more.

Cynthia asked me last week if she could borrow a trap to try to catch the mom and find the other two kittens. I lent her a trap and she planned to begin her trapping efforts later in the week.

When I talked to Cynthia on Monday, she reported that there had been no sign of the mother cat and kittens. The neighbor said the mother cat had moved the kittens again. 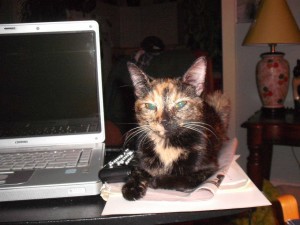 Cynthia also reported, however, that she had “another new face” show up on her back porch. She sent me photos of a very petite tortoiseshell kitty who she said was “very noisy.” Cynthia was worried that the little cat was in heat or already pregnant and asked if we could get her in for clinic this week. We agreed to meet up on Tuesday to do the cat exchange. Cynthia thought the cat had been recently dumped as she was very friendly and was familiar with cat flaps. She also kept continually trying to get in the house with Cynthia.

This morning Cynthia wrote me and said she was “speechless” and there was a crimp in our plan to get the tortie girl in to be fixed.

Turns out, this little girl is the mom to Cynthia’s two kittens. That little cat had somehow hunted down her babies inside Cynthia’s house, ingratiated herself to Cynthia, and then darted inside to find her kittens. 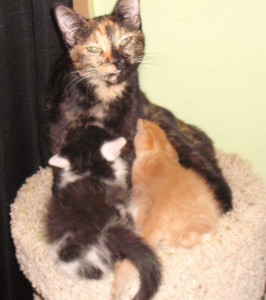 Cynthia said the babies went wild when their mom finally found them in their room. Cynthia also said that she thinks she misjudged why mom was so anxious previously. It was not because she was in heat, but because she was searching for her kittens.

I still cannot believe that this little cat tracked down her two kittens this way. They were in a house and she had to fight her way past Cynthia’s outside cats, go through the cat flap into the back porch, and convince Cynthia to let her inside. And she did all of that to get to her babies. Amazing!

And how, in the world, did she know where they were?

I asked Cynthia if she thought the little mom would lead her to the other kittens. Cynthia said she thought something must have happened to the other babies, as the mother cat had no milk. The kittens tried to nurse, but it was more just a bonding ritual than an actual feeding. Because of the lack of milk, Cynthia thought the other kittens were no longer around and that was the reason the little mother had come looking for her other two babies.

In any case, this is one of the happiest stories I have heard in a while. Of course, we’ll keep you posted if Cynthia does find the other two kittens.

This little family will eventually need new homes, so if you are looking for fluffy, cuddley kittens or a smart mama, we have the cats for you.

I cannot help but notice that the mother cat looks as if she is smiling in these pictures. One satisfied and intelligent creature. Never underestimate the power of a cat…or of a mother. 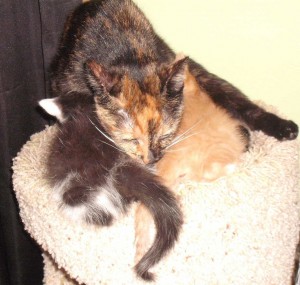 2 Responses to A Mother’s Love.