No Voice Unheard Speaks for Those who Cannot. 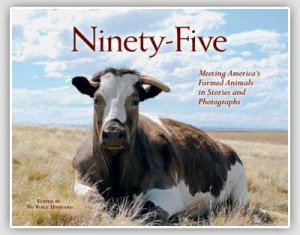 I had an emailed newsletter this past week from the organization, No Voice Unheard. The newsletter documented the story of Gilly, a laying hen who was rescued from an egg factory. The rescuers went to the factory planning to find homes for 500 of the chickens. When they arrived, they were told that 160,000 needed rescued or they would be sent to a slaughterhouse. Gilly was one of the lucky 1,000 hens who went on to lead a better life.

Read Gilly’s story HERE. Please be warned, it will bring tears to your eyes and you may never, ever be able to eat an egg or a chicken again (but, hey, that would be a good thing).

No Voice Unheard is an independent publisher of “beautiful and creative books that are cutting edge in their content and presentation, giving voice to those who are ignored or disregarded by society, and illuminating important social issues often ignored by profit-driven publishers.” They sent the newsletter about Gilly to promote their new book, Ninety-Five: Meeting America’s Farmed Animals in Stories and Photographs. Gilly is featured in Ninety-Five.

Where you might ask did the title for the book come from? Ninety-five, as the web site explains, is “the average number of animals spared each year by one person’s vegan diet.” 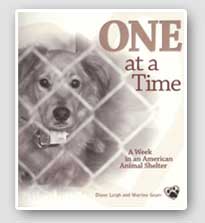 Several years ago, I read No Voice Unheard’s first book, One at at Time: A Week in an American Shelter. This book documented animals in shelters nationwide using photos and often poignant stories.

What is so heartbreaking about One at a Time is that many of the animals featured did not get adopted. They were euthanized. Their photos and stories on the pages are the only remnants of their heroic and, often short, lives. I ordered several copies of this book and gave one to our local library. But I must confess, it is hard to look into the eyes in the pictures and know that those eyes no longer flicker with life or love. It is a story that had to be told–the story of happy, healthy animals who were destroyed unnecessarily because of our “humane” system.  The authors, Diane Leigh and Marilee Geyer, were much braver than I think I could have been.

No Voice Unheard also explores the horror of zoos in their book, Thought to Exist in the Wild: Awakening from the Nightmare of Zoos.

To find out more about these books and to order your own copy, please visit the No Voice Unheard web site HERE.

No Voice Unheard believes as I do: there is power in books.

Posted in Books and Odds and Ends, Daily Life of a Rescuer

One Response to No Voice Unheard Speaks for Those who Cannot.