Please Speak out for Nitro’s Law. 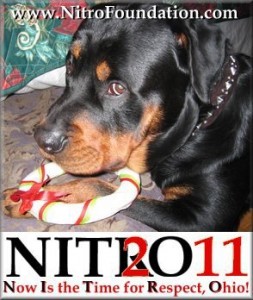 Nitro’s Law (now called HB 108) is a very important animal cruelty law waiting for passage in Ohio. The proposed law acts to create felony provisions for certain types of animal cruelty or provide felony-level penalties even if the crime is not specifically deemed a felony. Sadly, most of Ohio’s animal abuse laws are very outdated and only charge misdemeanor penalties for even the most disgusting animal cruelty.

Nitro’s Law was introduced after 15 dogs were found dead or dying at the High Caliber K-9 boarding kennel near Youngstown in October 2008. One of the dogs that was starved to death was a gentle Rottweiler named Nitro who had been left at the kennel by his beloved family while they helped an ill family member. The owner of the kennel, Steve Croley, received a plea agreement and pled guilty to four misdemeanor counts of animal cruelty, serving only four months in jail.

Because of this shockingly minor penalty for such a horrendous crime, Nitro’s Law was introduced and is still trying to make its ways through the halls of justice.

The Ohio Criminal Justice Committee held their second hearing about Nitro’s Law on Wednesday, April 6. It is now hoped, after this meeting, that Nitro’s Law will be out of the House and on to the Senate before Easter.

Speaking to the Committee, Nitro’s dad, Tom, said, “Nitro was not a democrat, republican, liberal, or conservative….he was my boy.”

Please continue to write your Ohio representatives and tell them to support this very important animal cruelty legislation. To find your representative, go HERE.

You can also read Dr. Patrick Mahaney’s blog HERE and watch his YouTube video where he eats dog food to show his support of Nitro’s Law. He got this idea from Nikki Moustaki, a dog trainer, who posted a video diary of herself eating dog food and plans to continue eating dog food (she started on February 1, 2011) until Nitro’s Law is passed. Read about her campaign HERE.

Additionally, visit the Nitro Foundation on Facebook and the Nitro Fan page by clicking HERE.

No more dogs should die in Ohio from such disturbing abuse. The only way to stop the cruelty is to make our laws harsh enough that the abusers truly are punished for their actions, so others will think twice knowing there are consequences for their despicable deeds.