Sir White Wiskeys is Now Safe And Recuperating After a Vicious Attack!

We are not sure what kind of animal ripped into poor Sir White Wiskeys. Whatever it was, however, chewed him up pretty good. When our friend Betty wrote me that she had another kitty in need (Sir White Wiskeys came from the same neighborhood as Brian’s sweet Leo Albert), I told her to get him to Noah’s Ark as soon as she could. She said the cat was bloody and leaking a lot of pus. Betty had only seen the cat a few times before he showed up with wounds to his neck and the side of his face. She was worried that her sister’s Husky, a known cat killer, had attacked the seriously injured cat.

At Noah’s Ark, Dr. West put Sir White Wiskeys (he received his name because he was such a gentleman and had gorgeous white whiskers) out so she could clean up his injuries and neuter him at the same time. She had thought the wound would require a drain tube, but with a great deal of cleaning and flushing, the drain tube was deemed unnecessary. Dr. West was not sure what had caused the abscess and bite on Sir White Wiskeys. It could have been the Husky, although she was not sure if the cat would have survived that. It also might have been a raccoon or another cat. Happily, this gentle boy tested negative. We had been quite worried about that since he had been wandering the streets where Leo Albert had come from; our Leo Albert who tested positive for feline leukemia. 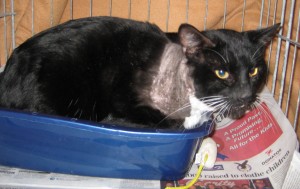 Sir White Wiskeys, it turned out, was a very nice cat–too nice to be returned to a place where he might end up even more seriously injured or dead in the future. So now this big guy (he weighs over 12 pounds and that is even after Betty told us she thought he’d lost weight during this ordeal) is recuperating with Carol. As soon as he is feeling better, we’ll post him for adoption. We know this sweetheart of a cat will find a safe, forever home very quickly.

We’ll keep you updated on our handsome Sir White Wiskeys. He is a talker, a lover, and a survivor.