Good-bye to Leo Albert Blain. The LAB has Moved On, but Remains in Our Hearts. 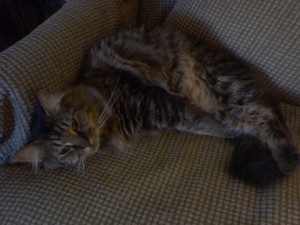 Leo Albert came in to our lives back in February with the cold and snow. I first reported on him and another “Miracle kitty” at the beginning of March in a blog posting (you can read his story HERE). Because this sweet little guy was feline leukemia positive, we had nowhere to put him with our other negative kitties. Feline leukemia is easier to transmit between cats than FIV. I put the word out that we needed a foster home without other cats or with dogs. No takers.

Then on one of my PetSmart cleaning days, I happened to be talking about Leo Albert (who was just Albert at that time) to our good friend Brian as he checked me out. Brian made a passing comment that didn’t hit me until later. He said, “I don’t have any other cats.” When I finally realized what Brian’s words meant, I sent him a message to see if he was saying what I thought he was saying. Yes, he would be willing to foster Albert (a foster stint that eventually turned into an adoption). Shortly after Brian’s birthday at the beginning of March, Bobbie and I took Leo Albert to his new home. You can re-read that story HERE.

Brian and his mom had always had cats, but it had been a little while since their last one had passed on. Carol and I routinely bugged Brian about adopting from us, but until Albert, Brian had always waved our suggestions away.

Leo Albert became the king of the household. Brian was always regaling us with stories of his antics and showing us photos on his phone. If you happen to be friends with Brian on Facebook, you will see that he has one whole photo album of pictures of the LAB (Leo Albert Blain).

But Leo Albert’s happiness was to be short lived.

On November 26, I had a text from Brian that he had to take Leo Albert to see Dr. West because he was not eating. Dr. West was running tests and discovered that his white blood cell count was up. In fact, Dr. West told me that she didn’t know how Leo survived as long as he did with those white blood cell numbers. 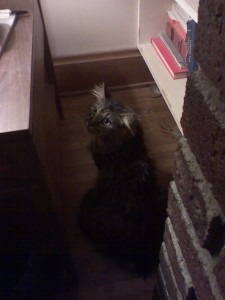 I know how he survived. Brian kept him alive. He gave him his antibiotics faithfully. To get him to eat, Brian bought small pouches of the most expensive soft cat food PetSmart carried and took it home and chopped it up in a blender. He then fed Leo Albert a tasty gruel in small bites until he had eaten most of the concoction. Leo Albert continued to get better with Brian’s loving care.

At the beginning of December, Leo Albert started having trouble walking and he began to spend a lot of time lying in his litter pan. He was still eating and Brian was cleaning him up every day and night, because he was having accidents that made a mess of his backside.

Leo Albert was on a downward spiral that Brian could not stop.

On December 17 around 2 pm, I had a text from Brian who had taken Leo Albert back to see Dr. West. The text said: “At 1 pm, Leo Albert Blain was put to rest. The vet and I agreed it was for the best.”

Leo Albert had lost the ability to use his back legs and his bladder was also blocked. We are not sure if he had some type of nerve damage due to the feline leukemia or what exactly was causing the problem. But Brian did not want him to suffer any longer. 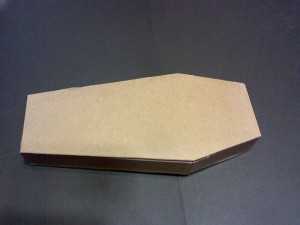 Today Brian brought Leo home. He made him a small coffin and plans to bury him in the spring behind the house. Leo Albert was only a little over a year old. He spent nine happy months with Brian and Brian’s mom. I could not ask for a better life for our little guy. He got to experience love, a home, and the joy of being a wanted cat–things he would never have had without Brian.

Thank you, Brian for making one of our kitties your own.

Posted in Over the Rainbow Bridge