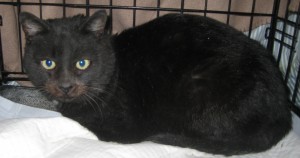 A few weeks before Thanksgiving, Kim and Paul Swider (Naomi’s former foster parents) told me they had seen a cat get dumped and then hit on the road in front of their house. They chased after the cat who was severely injured, dragging it’s body by it’s front legs because it’s back legs were not working. But try as they might, the cat, even on only two legs, would not let them near it. I told them if they could catch the cat to bring it to me any time so I could get it in for medical help or euthanasia depending on how bad it’s injuries were.

The next week Kim and Paul reported more sightings of the cat–it was still dragging itself around. Paul had made sure to put food out for it, but even when the cat pulled it’s body on to the porch to eat, Paul could not grab it.

Finally, the Monday before Thanksgiving, Paul was able to trap the all black cat, who they named Biscuit, and bring him to me. I quickly took him to Noah’s Ark thinking they might have to euthanize the poor cat. But when Dr. Jensen let Biscuit out of the trap he was in, he was no longer pulling himself on two legs. Rather, he was walking on all four, but with a slight limp. Biscuit was also not a feral cat, as I had feared. I worried about putting a cat who had experienced such trauma back outside to take care of itself. Biscuit, however, was very friendly. He must have been someone’s cat–maybe even the people who tossed him from the car.

From the X-rays, we discovered that Biscuit had not just been hit by a car, he had actually been run over by the car. Yes, run over by an enormous vehicle, tires smashing bone. His pelvis had been broken in five to six places. The good news, however, was that in those weeks when he could not walk and pulled himself around, the bones had mended and he was healing. He would not need surgery. Only further cage rest to allow his pelvis to completely mend.

I was amazed. Here was this cat who had been run over by a car and he was going to be okay. His bladder and bowels were working fine. Although he was pretty thin (he did have pebbles in his stomach from trying to find something to eat), he would recover. He did have a little bit of a limp, but even that has almost vanished now. Dr. West says that cats are truly the ultimate survivors. She thinks that if anything ever happens that wipes out the rest of the planet, cats will still be here, the only species that will have lived through whatever killed the rest of us.

Because Biscuit needed more weeks of rest, he went to stay at the shop with Carol where he would be the only cat in residence. Dr. West didn’t want to neuter him until his pelvis had healed more and we were not sure how our other cats would take the smell of an un-neutered male cat’s urine. So to the shop he went, where he quickly proved how resilient he was.

Carol placed Biscuit in Alex’s bathroom at the shop. Alex was now at PetSmart waiting adoption, so his room was free. Alex had spent many weeks in that bathroom with no problems. The very first night Biscuit was in the bathroom, he figured out how to pull a panel off the wall, climb through a hole, and escape out in to the shop. Carol spent four days looking for him with no luck. Only a trap and some smelly soft food retrieved our “Houdini” who then went into a dog crate to prevent further escapes. Angry at his forced imprisonment, he trashed every cage Carol placed him in. 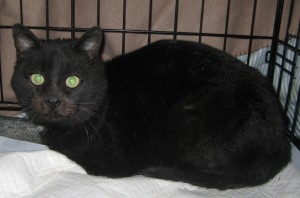 We know Biscuit must have been someone’s cat. Not only is he friendly, but he also can use his paws to open doors. The very first moment after we put him in Carol’s bathroom at the shop, he reached out his paw and tugged at the door. The ladies at Noah’s Ark also told me he had tried repeatedly to break free from his room.

Biscuit is now almost completely healed and will soon be looking for a new home. He may always walk a little funny with a tiny limp (but even that has almost disappeared). He will probably always be too smart for his own good. And he will definitely always be a survivor. But our little survivor also needs to be something else–wanted. We hope to find him a forever home very, very soon.