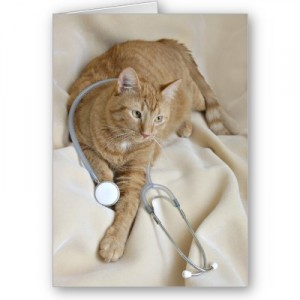 While Joe and I were at lunch the other day at the NCPA (National Community Pharmacists Association) convention in Philadelphia, we happened to talk to a pharmacist who told us about a trip he had taken to the Finger Lakes region of New York. While scanning a local newspaper, he saw an ad for Water Street Pharmacy in Dundee, New York. The drugstore’s advertisement encouraged people to stop by and see Jack the cat.

This pharmacist, who was a cat lover, was intrigued by the idea of a pharmacy cat, so he did indeed stop by and meet the infamous Jack. Jack, he said, was very, very friendly and came out to greet him, rubbing up against his legs. He said the pharmacist and owner of Water Street Pharmacy, Tracey Knapp, told him that many of her older customers would not leave without seeing Jack when they picked up their prescriptions.

While I have heard of other businesses having both dog or cat mascots, I have never come across a pharmacy with one. Joe and I had discussed having a cat in Plain City Druggist, but we feared a wily feline might try to escape or customers would complain of allergies or cat fur in the aisles.

Happily, those are not concerns for Water Street Pharmacy and Jack. In fact, Jack has even received a “service recognition award” for providing the pharmacy customers with impeccable service. You can see a photo of Jack, Pharmacist Tracey Knapp, and read about Jack’s award HERE.

We may have to rethink our hesitations about a pharmacy feline.

While the cat in the photo with the stethoscope is not Jack at Water Street Pharmacy, Jack does appear, in the photo about his award, to be a large tabby cat, too. You can order copies of the cat and stethoscope get well card through Zazzle.