Barney and Oleander are Two More Boys We are Featuring as “Adopt-A-Less-Adoptable-Pet Week” Ends. 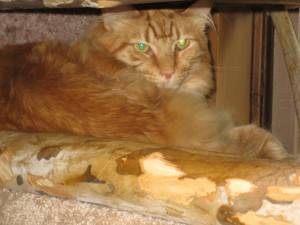 Barney and Oleander are the final pair of cats we are featuring for Petfinder.com’s “Adopt-A-Less-Adoptable-Pet Week,” which ends today, September 25. “Less Adoptable Pets” are not pets that people would not want–they just have some issues that cause them to be overlooked initially. This includes shy or senior cats, black cats and dogs, and animals with handicaps. They are no less capable of love or companionship. They just need someone who can look past their initial issues and love them despite their differences.

Oleander and Barney are buddies. Dr. West calls them the “Brokeback Mountain Boys,” because they love each other so much and like to hang together. Oleander is a big orange, fluffy tabby who is about 5-6 years old. Oleander came to us from a really bad situation in a trailer park. We could not return him to that, so he came into foster care with us when he was much younger. We thought he would get adopted very quickly. His other cat friends came and went, but because he is shy, he was always overlooked. Oleander loves other cats and especially his good feline friend, Barney. Oleander is a bit shy when he first meets you, so he will need time to adjust to his surroundings. He does best with Barney, so we do want them to be adopted together.

Barney is a brown, short haired tabby who is also in the 5-year-old age range. He originally was living outside. One of our volunteer’s was taking care of him by providing shelter and food. But when he developed a very bad ear infection that left him partially deaf in one ear, Dr. West could not allow him to be an outside kitty any longer and she asked us to bring him in out of the weather. Barney has flourished by being inside, but he is a bit shy with new people. He and Oleander quickly bonded and they are now best friends. They have helped each other overcome some of their shyness with people and are always together.

Barney and Oleander are also currently living with Bells, who is also in foster care (and was previously featured during “Adopt-A-Less-Adoptable-Pet week”). These three kitties get along great.

We know Barney and Oleander would be fine in a home with other non-dominate, laidback cats. They would probably be best in a quiet home without small children where they could adjust slowly at their own pace. 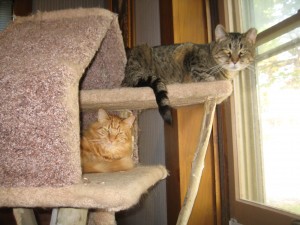 If you would like to give Oleander and Barney a home together, there would only be one adoption fee, as we really want to keep the boys with each other. If you are willing to give them their own time to settle in, these super boys will not disappoint you. Unfortunately, they have several things working against them–they are shy, they are older, and we also want to keep them together. But we know the perfect family is waiting for them!