Bells is Our Latest Kitty for “Adopt-A-Less-Adoptable-Pet” Week. 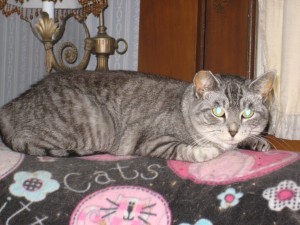 As I mentioned in the post featuring Bean Bag and Apple Seed, September 19-25 is “Adopt-A-Less-Adoptable-Pet week.” This celebratory week, which is sponsored by Petfinder.com, showcases pets that often get overlooked by people searching for a furry addition to their home. These might be cats that are a bit shy, have special needs, or are older. Additionally, black cats often get passed over because of long standing prejudices about black animals being “bad” or involved in witchcraft.

I promised to feature some of Black and Orange Cat Foundation’s kitties during this week–kitties that love their foster homes and have been staying with their fosters for quite a long time.

Our cats are very spoiled and we understand why they might not want to leave us to venture off to a new home. But we want them to have their own family and a home where they are not fosters, but have found their forever mom or dad.

Bells is our featured cat today. Bells is a silver tabby who got her name because she arrived just before Christmas two years ago and looked like a “silver bell.” Bells is about two years old and has fur that is as soft as a bunny. She likes other cats once she has warmed up to them. She has lived with a rabbit and with her two feline buddies, Barney and Oleander (who will be featured later this week).

Bells came to us during a trapping project–thus, her ear is eartipped, because we thought she was a feral cat. When she began head butting and rubbing up against the side of the trap, we knew she was a friendly cat. While Bells is friendly, she is also shy until she gets to know you. This has been her downfall in the realm of adoption. When we take her to PetSmart for adoption events, she hunkers down and refuses to uncoil herself from a tight ball until she is home again. She did the same thing when she was in the cage we have at PetSmart. We thought she would get adopted quickly, because she is so gorgeous and so friendly. But at PetSmart, no one ever saw her true personality. Because of her shyness, she has been with us for a year and a half. 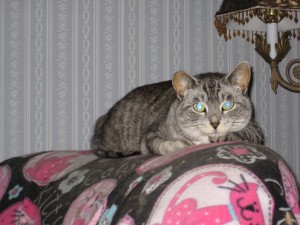 Bells would be best in a quiet household where she could adjust in her own time. She could be with other non-dominate cats, but she really likes all the attention and gets a bit jealous if you don’t pour on the love. She and the Brokeback Mountain Boys (Oleander and Barney) are buds now, but it took Bells her own time to befriend them. If you don’t rush Bells and allow her to settle in at her own rate, she will reward you with love, love, love.