Mini Cooper S Donated To B and O. We Need your Help to Decide How to Raise Money With It. 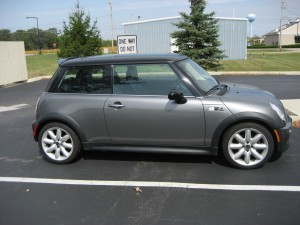 One of our good friends and supporters, Ernie Sparks, donated his son’s Mini Cooper S, which is the sport version of the Mini (it has a clutch with six gears and the speedometer goes to over 150), to B and O to use however we wish to raise money for the kitties. Ernie is a pharmacist who owns Ernie’s London Apothecary at 54 West High Street in London, Ohio. His son is living in New Orleans now and no longer needs the car, so he asked us if he could donate it to Black and Orange. Of course, I said YES!

I wanted to find out your thoughts on the best way to raise the money. We thought about doing a raffle with everyone buying tickets that cost $100. If we sold a minimum of 60 tickets, we would have the $6,000 we want to raise. If we kept going beyond the 60 tickets, we could raise more.  Carol also suggested that perhaps we limit tickets to 200 and sell those for $50. That would raise $10,000 and there would still be a 1 in 200 chance to win. Those would be pretty good odds to win a car.

We also thought perhaps we could just sell the car outright to someone or post it on Craig’s List to sell. But we thought that we might gain a bit more publicity with the raffle and even raise more money since people would take a chance since it was for a good cause. If we did the raffle, we could advertise for it in local newspapers and also have the Plain City and London papers do an article about Ernie to raise awareness and sell more tickets.

Let me know your thoughts on the best way to raise the most money to help the B and O kitties.

And, finally, we just want to thank Ernie again for this very, very generous gift!