September 19-25 ushers in “Adopt-A-Less-Adoptable-Pet week” brought to you by Petfinder.com.

I thought I would try to feature several of our “extra special cats,” cats that really like their foster homes and are not sure they want to leave (I can’t blame them–they have very cushy lives), during this week on the blog.

As Petfinder.com discovered in a survey, most rescues and shelters find that senior pets and pets with handicaps or special needs (FIV + cats) often have the hardest times finding homes. Additionally, “big black dogs” are hindered by “big black dog syndrome” and often get overlooked by potential adopters. The same is true of black cats.

First up for our “Kitties Who Love their Fosters Too Much” are Bean Bag and Apple Seed.

As you may remember, Bean Bag is the little kitten who came to us back in April with a broken jaw. A friend of ours called us from a construction site and thought someone had hit the tiny kitten in the face with a shovel. Bean Bag’s growth was stunted from the horrible situation he had been living in without enough food and he was half the size of his brother Apple Seed (while he has put on weight, he is still a much smaller version of Apple Seed–he will always look like a kitten).

Both boys are now doing wonderfully. They have really blossomed with love and care and Bean Bag’s jaw is completely healed thanks to the hard work of Dr. Tom Klein of East Hilliard Veterinary Services. The boys have had some ongoing difficulties, however, with diarrhea (they have very sensitive systems) and with watery eyes and noses. Bean Bag’s right eye did suffer trauma from whatever hit him and he cannot see out of that eye. That eye waters some because of that and is a bit clouded over. Although, we’ve had Apple Seed on every medicine known to veterinarians, his eyes also still water and he gets “kitty boogers” in his nose, which just have to be cleaned out on a regular basis. None of these things are major, but it is just going to take the right person who doesn’t mind that the boys have these problems. 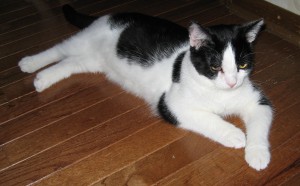 On top of that, we really want Apple Seed and Bean Bag to stay together. They have been through so much that we think they deserve to have each forever.

You will not find two sweeter boys. Even though, when they sniff you (which Bean Bag especially likes to do before giving you a lick on the chin), they sound a bit like Darth Vader breathing, they make up for their small differences by how loving they are. Both boys follow me everywhere. They are constantly on my heels as I walk through the house. If I sit down, Bean Bag is in my lap and he will stay there for as long as I let him. One day when I was not feeling well, Bean Bag seemed to sense this and came and found me and sat with me. When I pick him up, he immediately rubs cheeks with me.

Bean Bag and Apple Seed are the most loving cats I have ever met. They adore people and they don’t realize that they are not as handsome as other cats. They just know they love whatever person they are around. They have never met a stranger (and that goes for cats, too–they love all cats). When we’ve taken them to adoption events, Apple Seed always falls over for a belly rub and garners the most attention as he reaches a paw out to grab at his admiring public. Bean Bag lies in one of our laps for the entire two hours. 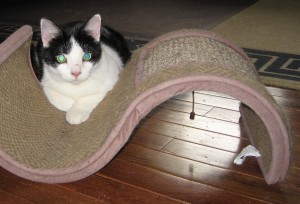 The boys are now going on a year old. They don’t realize they are less adoptable, but because of Bean Bag’s blind eye and both their runny eye/nose issues, they have been overlooked time and time again. Even though they are the sweetest cats, it is hard to see that personality from a photo without meeting them. They can’t go to PetSmart, however, because of the very issues I’ve described.

Their mom, Cat-cus, who is a Siamese, got adopted very quickly and has already gone to her new home. The boys are part Siamese, even though you cannot tell by their black and white coloring. Apple Seed does look cross-eyed quite often, proving his Siamese heritage. Dr. West (who named the boys and their mom) says Apple Seed is so ugly he is cute. I don’t know if Apple Seed would like to hear that, but what he lacks in appearance, he makes up for in devotion. Dr. West’s other favorite saying about Apple Seed is that he is a “hot mess.”

I know the right person is out there who is just looking for love and doesn’t at all mind a scruffy face or a ‘hot mess.” In fact, it is going to have to be one very, very special person for these boys to leave my foster care. I just love them so, so much. They may be less adoptable, staying in foster care for almost 6 months now, but they are not less lovable. In fact, they are more so.