Beautiful Blessing of the Animals Ceremony. 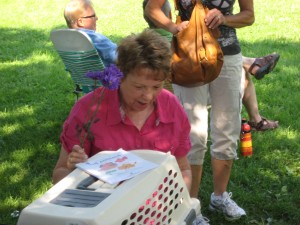 On Sunday, August 29, we attended the Blessing of the Animals ceremony in Goodale Park presented by King Avenue United Methodist Church. A friend of Chuck and Carol Gaul, Charlene Bohn, attends King Avenue and wanted to remember the Gaul kitties that were killed in the recent house fire at the beginning of August. Charlene asked parishioners to donate cat food to B and O to honor the Gaul kitties and she also presented eleven flowers at the altar in remembrance of the beloved felines.

Carol and Chuck came for the service. Carol carried the box that contained the cremated remains of her eleven cats. I brought Rascal, Carol’s other foster, who has been staying with me since the fire. Rascal was the only survivor because he was at PetSmart waiting to be adopted the day of the fire. For this brief moment, the twelve cats were once again reunited. 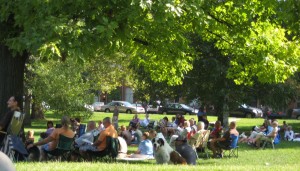 Several other friends of Carol and B and O showed up for the ceremony. Bobbie, Debbie, Brian, Allen, Dr. Kim West, Susan, and Carol’s daughter and son-in-law all came to lend their support and show their love. While we were there, Kristin sent a text from Canada, where she was attending a wedding, to tell Carol that she was thinking of her. We were surrounded by animal lovers and many, many beloved animals. The dogs’ barks and howls added to the joy of the event. It was so nice to look around and find happy furry faces everywhere.

Charlene made a brief announcement about Carol and Chuck and why the church had decided to collect the cat food for B and O. Then when it was time for the Blessing, everyone took their animals down to the gazebo and received prayers filled with love and emotion. A pink vase sitting on the gazebo steps was used to collect flowers to remember beloved pets that were no longer with us. Carol walked forward and put her flower in the vase, all the while clutching the wooden box with the remains of her feline family. It was very emotional and there were tears, of course. 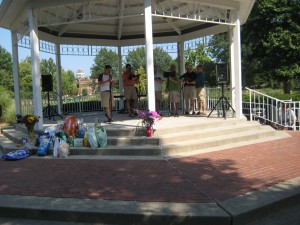 I want to thank Charlene and King Avenue United Methodist Church for a lovely service and for remembering the Gaul cats during this time when animal lovers were gathered in gratitude for the pets in their lives. I also want to thank Debbie, Brian, Allen, Dr. Kim West, Susan, and everyone else who came out to show their support for Carol and Chuck.

To see all of our photos from this lovely day, visit our Facebook page: B and O on Facebook 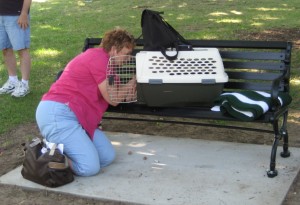