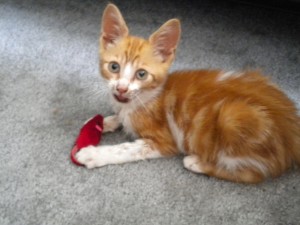 Last week, Lisa, one of our adopters (she adopted a kitten, Maddie, a few years ago and then last year helped her mom adopt two kittens from us), wrote to ask if Black and Orange could help with a kitten that her mom found dumped near the family’s barn. Lisa said that it looked as if someone “literally threw him from the car.” Lisa went on to say that “his face is scraped and his bottom lip looks like it was torn off and he has tar in his fur. Mom has him eating and drinking and he’s super friendly, but he definitely needs to see a vet and get some medical attention.”

From Lisa’s email, I didn’t realize what terrible shape this poor baby was in. It sounded like a few scrapes and bruises that could be healed with antibiotics. And even though she said, “his bottom lip looks like it was torn off,” I was not prepared for what was going on with this little guy.

I told Lisa to take “Oliver” to Noah’s Ark Vet Hospital in Dublin, so last Friday, she did. I stopped in later Friday evening and Dr. Achtel pulled out the digital camera to show me Oliver’s lower jaw. As you can see in the photos I posted, it looks as if his lower jaw is missing. In the photos Dr. Achtel had me look at, he had to explain to me what I was looking at–when the jaw was open and closed, because I could not tell. It just looked like a mass of raw flesh. I was cringing, thinking of this poor kitten trying to survive–and he is only a kitten. Dr. Achtel said he weighed less than two pounds and was probably only eight weeks old. Just a baby and someone did this to him either from the trauma of being tossed out of a car or something else too horrible to imagine.

Dr. Achtel was sending the photos around to his veterinary colleagues, because he was not sure how to proceed. He said the lower jaw may need to be completely rebuilt and there was not enough skin the way it was to cover up the exposed bones (yes, there are exposed bones). They had sent Oliver home with Lisa and her mom on antibiotics to treat him for the infection that had set in. Dr. Achtel told me he had never seen anything like Oliver’s condition before. Now, you know you are dealing with excellent veterinarians when, instead of acting worried, they can’t wait to work on the challenge to help an animal in need–that was exactly Dr. Achtel’s attitude.

Dr. Achtel also said that Oliver was eating and playing and did not act as if he was in pain. He just could not believe the resiliency of kittens. We discovered the same thing, however, back in April with our little Bean Bag, who also had a broken jaw from being hit in the face with a blunt object. Bean Bag tried to carry a ball around in his mouth and ate like a champ. Dr. West’s test for euthanasia is always if they will eat, she will not put them to sleep. Both Bean Bag and Oliver passed the test.

Lisa sent me photos of Oliver, not knowing that I had already seen the clinical pictures Dr. Achtel took. She told me that she was taking him back to Noah’s Ark this Friday and that he had been on the antibiotics, which were helping to heal his other scrapes and cuts. 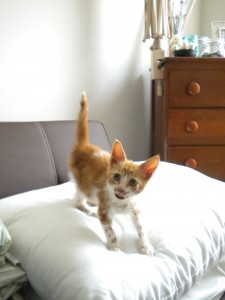 She told me, “Oliver is absolutely the sweetest thing and has the biggest heart. You’d never know he was even in pain. He just wants to snuggle and love and play. I attached some pictures of him for you. As you can see in the pictures, he doesn’t have his mouth open, that’s just his exposed jaw where his skin was ripped away. His other cuts and scraps are healing nicely. He got a little bath this weekend so he’s looking less shabby!”

Bless Lisa and her mom for caring for this guy. I am continually ashamed at what we humans do to animals, but equally restored in my faith in our goodness by people like Lisa and her mom and the wonderful veterinarians we work with. I am also always amazed that cats so easily forgive and love us.

I’ll keep everyone posted on Oliver, but please send lots of good thoughts his way.