Hamilton Lost Part of a Tail, But Gained Super Powers. 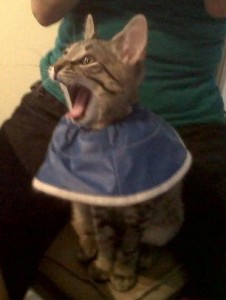 In my super cat cape, I paralyze my enemies with my high pitched kitten scream!

Hamilton, sadly, had to have part of his tail removed this past week due to being thrown from a car as a baby. The trauma of that experience damaged his tail so that it was not receiving blood flow and did not work–it just basically dangled and he could not move it or lift the end.

After a surgery this past week that left him with a small stub, Hamilton is recovering nicely. He also has gained super cat powers with the loss of his non-working tail–powers that seem to have come to him via his e-collar cape. 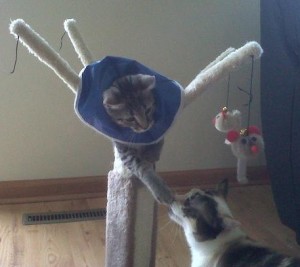 If you want to be my sidekick, Moo, you must do exactly as I say. With the touch of my paw, I give you super powers, too.

Hamilton’s surgery has not slowed him down. He has been fighting kitten crime and rounding up animal abusers due in part to his newly acquired super powers. You can call him “SS”–Super Stubby.  Super Stubby will use his keen cat powers to aid him in finding his forever home. 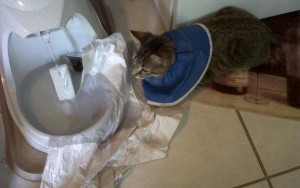 I think a crime was carried out here at the water fountain. I am gathering clues..what do you mean, I am the one who made this mess? Show me the proof! No punishment for Super Stubby!