Kristin and Christina took Miss Springfield, the gorgeous Siamese who hitched a ride with Kristin when she was in Springfield on a work assignment, to see Dr. West and discovered that our “prego” kitty needed a new nickname. She could no longer be called “Mama,” because she was not pregnant. 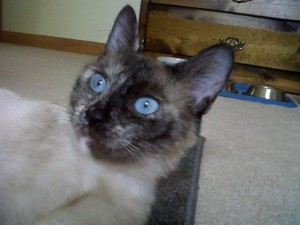 Boy, did I have you all fooled!

Just to remind you how Springfield wormed her way into our lives:  Kristin saw her standing by the side of the road, trying to make her non-existent thumbs work so she could play kitty hitchhiker. Kristin slowed down and before she could ask what a nice cat was doing in such a bad place, Springfield jumped inside the car and demanded to be taken home with Kristin. Such is the will of these cats. From Kristin’s car, she went straight to Noah’s Ark, where Dr. West diagnosed her as pregnant (and at her age!). Shocking!

But weeks passed and no babies were ever born. We had talked at length about whether to abort these “non-existent” kittens and had decided to let “Mama Springfield” have them. We had worried for nothing. Like a can of tuna in a house of cats, Springfield’s pregnancy disappeared–too bad that doesn’t happen with every supposedly pregnant cat! We could save a lot on our spay budget.

No worries now. Springfield went today to get spayed, so she will never, ever be a “Mama.” Thank, goodness!!

We’re not exactly sure what happened. Dr. West said it was just a misdiagnosis and we are thrilled with that. While we know Kristin and Christina are slightly disappointed not to have tiny kittens, Miss Springfield is not. She had decided long ago that most children, especially those spoiled Siamese, are kind of bratty.

Look for Miss Springfield soon in her very own, forever home. 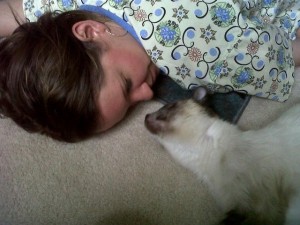 "It's okay. I love you even if you're not pregnant."