Slobberfest at Coffman Park in Dublin 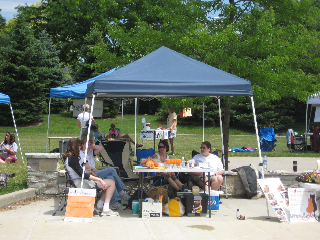 Black and Orange Cat Foundation spent Saturday, June 13 at Coffman Park as part of Slobberfest, A Celebration of Dogversity and Cattitude.  You can visit the web site at www.slobberfest.org to find out more about the event which was sponsored by the Humane Society of Madison County.

The event, which ran from 11-4, hosted nearly 40 different rescue groups each of which  brought adoptable animals, including dogs, cats, and even rabbits to a lovely park setting in Dublin, Ohio.

We set up a tent (which we use at our adoption events at the PetSmart on Sawmill Road–thanks to Pat and the gang for allowing us to borrow two tents for the event) and arranged several items for display and sale, including reversible  dog bandanas and cat beds, and lots of educational info about our group and TNR.

We also brought several adoptable kitties to the event: Artimus and Xandria, Miss Bells, and Mitch and Clayton. Mitchie was not in the mood for an event and actually led us on a grand chase through the house to avoid attending.  And we probably should have taken his advice and let him stay home (especially after wearing ourselves out with a fifteen minute run!).  It was a bit too hot outside for the kitties who refused to drink water at our command (when does any cat take orders?) and a bit too noisy with lots of barking dogs.  Additionally, many of the dogs were quite rude and boldly stuck their noses too close for Miss Bells’ comfort–she proclaimed with much spitting and hissing and retreated to her litter pan for much of the day.

We did send the cats home early–once they were back in the comfort of air conditioning, they forgave us our sin of forcing them to bask in the June heat.  And while we did not have any adoptions, several of the other groups did find new homes for their animals.  Kudos to them!!

It was a good day and an event that we can foresee growing even larger in the future. With lots of advertising, it might even become as big as the Irish Festival which is also housed in the same location each August.  Perhaps Slobberfest could be a prelude to the Irish “Slobber Festival” that culminates after too many Celts drink too much green beer and Guinness. 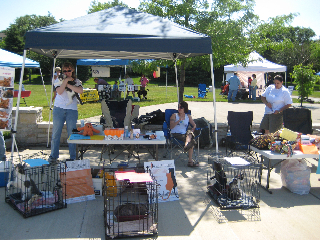