Look Who Hitched A Ride Back to Columbus.

One of our volunteers, Kristin (who saved Lydia, too), was in Springfield yesterday for her work. She got lost and on a lonely country highway, spotted what she thought was a Siamese cat in the road. We have all decided that we must have “Siam-dar” instead of “Ra-dar” because the last few cats that have come to us have all been Siamese or Siamese mixes. The cat was in the median and there were no houses around, only fields, so Kristin found a place to turn around and went back to check. She thought the cat would be feral and she would just shoo it out of the road.

But, alas, this was no feral cat.

When Kristin got out of her car and went to inspect the situation, the little cat ran to meet her, did a happy dance, and was basically thrilled to be rescued. So Kristin packed her up in her car where she was greeted with purrs and head butts and general appreciation for being saved from becoming roadkill. Kristin had discovered the friendliest, “un-shooable” feral cat in existence.

"Look into my blue eyes...I commanded you to stop with my feline powers of persuasion."

Off the two headed for Columbus and Noah’s Ark, a new adventure for the fearless Siamese. 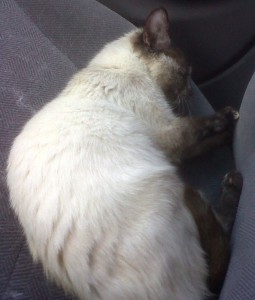 "Wake me up when we get to Columbus. Adventures always make me sleepy."

Once Kristin and, newly christened, Springfield arrived at Noah’s Ark, there were a few more surprises in store. First off, the little cat was only 6-8 months old, just a kitten. Secondly, she was going to need a new name. Dr. West suggested “Mama.”

You know where I’m going with this. Our little Siamese kitten is pregnant. And not just a little pregnant, but close to popping pregnant. Kristin swears she must have been sucking in her gut when she saw Kristin drive by, telling herself, “Don’t look pregnant.” But pregnant, she is, and that could be why she was out by the highway, abandoned. Possibly, someone discovered that Springfield was pregnant and did not want the kittens, so they dumped this sweet girl on a rural road to fend for herself.

Instead, our smart girl sent her kitty angels out in search of help. And help arrived.

Kristin thought Miss Springfield would be a short term visitor–Siamese always get adopted quickly. Instead, Springfield will now have her babies in safety far from the weeds and ditches where they might have been born. And Springfield will be staying for three to four months. A bit longer than originally anticipated.

We hope Springfield’s kittens will be Siamese, too, although, we have known Siamese mothers who gave birth to black and calico kittens, a hodge podge of genetics far removed from their Siamese moms’ breeding. We will see. And, besides, who doesn’t love kittens, no matter the color? 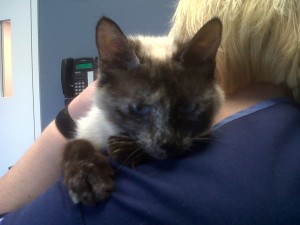 "Yeah, I made it to Noah's Ark and I will never be lost again!"

We’ll keep you updated on Springfield’s adventures as she has her babies and they all go off into a world far removed from that lonely Clark County highway.

One Response to Look Who Hitched A Ride Back to Columbus.