Miss Flower’s Beginning (not so happy, but she got her happy ending)!

Since I posted for Miss Flower on The Animal Rescue Site as a shelter story and one of my favorite rescues of all times, I received a letter from Miss Flower’s mom giving me the story of her life after adoption.  And now here is the story of Miss Flower before she came to us at Black and Orange Cat Foundation.  This part of her history was written by Kim, who has been working with us for over a year getting the cats around her house fixed and vaccinated.  Kim and her husband, Paul, live in front of a trailer park, so they typically have tons of kitties that come into their yard looking for food. The day Kim trapped Miss Flower was one of only a few times she had ever seen this little girl.

“and the before story-

Our neighbor hood was overrun with cats and kittens of all ages. Many of them were sick with runny noses and nasty eyes. My husband fed them twice a day and the weaker ones were always his favorites.  We took the sickest ones to the vet if we could catch them, but we did not have the funds to treat them all. For some, all we could do was feed them and hope they would stay strong enough for their own immune system to fight their disease.

Then we learned about Robin Craft and the Black & Orange Cat Foundation which has a trap, spay/neuter and release program and also has foster care and an adoption program. We caught several of the friendly cats and took them for the spay/neuter and release program. One of the early groups we caught had a little black and white fuzzy kitten who had shown up only recently to the food bowls. We had not seen her enough to name her.

We would drop the cats off and the next evening after their surgery we would receive a call giving us an update on how the cats did. We were told that the little black & white fuzzy had a hard time recovering and needed more veterinary care. Robin said she would take care of all of that and let us know when she could be picked up. For several weeks we received reports on the little kitten doing better, received a treatment, still weak, she wants to live, and always everyone loves her. During this time Robin said she would make a nice pet. My husband and I already had an older cat that was not cat friendly and had told Robin we were not prepared for a new cat. The kitten was put up for adoption. The kitten was named Flower and Robin’s eyes always twinkle when she talks about her.

Back to the rest of the cats- our cat population is much healthier, seldom do we see sniffles or runny eyes. Fewer cats have injuries from fighting and the beautiful healthy coats are nice to look at and even better to pet. Our older cat passed and we have adopted 4 of the kittens from our neighborhood and found homes for several others.

We always remember to donate to Black and Orange Cat Foundation, it makes our hearts feel good and each day when we see the outside cats so beautiful and healthy we know we are donating to a wonderful cause.” 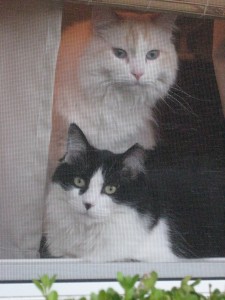 Flower and her sister, Star