The Final Chapter in Naomi’s Story: Her Happy Ending!

It has been a long time coming, but our toothless, sweet girl, Naomi, finally went to her forever home. And the story of how she got there and how her dad, Scott, found her is just as amazing as the rest of Naomi’s story.

Naomi with her new dad, Scott.

One of my friends, Jackie, from Siamese Rescue posted about Naomi to several of her friends who then promptly donated money to help with Naomi’s surgeries. One of those people, Susan, who is also involved with Siamese Rescue, not only made a donation, but also wrote about Black and Orange on her company’s monthly bulletin board. For May, the company did a board for “Be Kind to Animals Month.” Susan put up ten acts of kindness and under each one, some information that pertained to that subject. For the “Adopt a Shelter Animal” bullet point, Susan posted four of Black and Orange’s kitties. From seeing that bulletin board and the flyers about our cats, Scott, Naomi’s new dad and a manager in Susan’s department, checked out our web site.

Isn’t it just amazing how things happen? Susan learned about Naomi’s predicament, donated to help with her surgeries, and then was instrumental in finding our girl her new dad.

When I first spoke with Scott, one of the things he most wanted was to adopt a cat who had special needs and who might take a bit longer to find a home. In the process, while we were trying to decide on the perfect cats (Scott initially wanted two), a stray female, barely bigger than a kitten, showed up on his doorstep. Scott felt like fate had led her to him, so he decided he would take care of her medical expenses and keep her.

But he wanted a second cat and so we kept discussing different B and O kitties. I gave him a list of female cats to check out on the web site and he narrowed it down to Naomi and Lydia. After he met Naomi and her fosters, the Swiders, Naomi stole his heart (and thank goodness, because at the very same time, Lydia was winning over her new mom, Linda–so both got great homes).

Naomi tells foster mom, Kim, good-bye. Thanks for loving me and helping my mouth get better.

Kim and Paul Swider have had Naomi since last Fall, so sending her off to her new home was a bit bittersweet. They had nursed her through all her surgeries and watched her blossom as her pain disappeared. Miss Naomi is quite a talker and she was voicing her opinion the whole time as Kim handed her, wrapped in her safety blanket, to her new dad. Scott completely looked the part of proud father and before long, Naomi had snuggled down into his arms and was peeking out at us over his elbow. 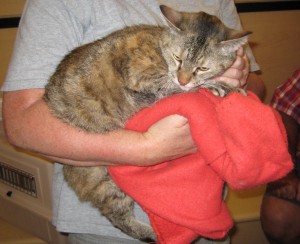 This story also has a funny little twist. Earlier this week, a lady called me from South Carolina. She had read Naomi’s story on the Petfinder site under the most heartwarming stories. She had a friend in California who had a dog with a similar problem–he had chewed on an electrical cord and had horrible holes in his mouth. But they could not find a vet to help with the problem and so she wrote me to find out who had helped Naomi. I promptly sent her the info for Dr. Tom Klein and East Hilliard Veterinary Services. The lady was going to contact them to find help for the dog in California.

So Naomi’s story has a second happy ending, because our girl’s ordeal may now help another poor animal!

I want to thank everyone who donated, wrote to ask about Naomi, and kept sending her lots of good thoughts. None of this wonderful story could have happened without all the support Naomi had from her hundreds of well wishers. I also want to thank Dr. Tom Klein once more for giving her the chance at a happy ending.

Thank you Scott for giving this girl the home she so truly deserved. Naomi sends slobbery, gummy, toothless kisses to everyone and a gigantic smile!! 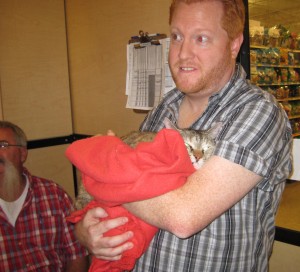 Settling in. Miss Naomi peeks out from behind Scott's arm.