How We Treat Animals…

Dr. Kim West with Fruit Bat, who had a fractured foot, after being dumped on a busy highway.

Over the weekend, Joe and I stopped at a quaint village in northeast Ohio called Zoar. This town was started in the early 1800’s by German separatists who came to Ohio to escape religious persecution in their home country. The name Zoar literally means “a refuge” and references the name of the city Lot escaped to in Biblical accounts.

One of the stories that the tour guide recounted while we were walking around the buildings of Zoar made me think about a quote attributed to Mahatma Gandhi: “The greatness of a nation and its moral progress can be judged by the way its animals are treated.”

In Zoar in the 1800’s, the dairy cows were considered to be “spoiled” by the milk maids who tended them. They were treated with the utmost care and all one hundred were given names. Outsiders said that the Zoar residents treated the cows so well that they even taught them to read. This joke resulted because, at the end of the day when the cows were brought back to the barn from sun filled days in the pasture, each cow would go to the stall that had their name above it. Surely, the cows must have been able to read their name to find their stall!

The people of Zoar believed that the better the cows were treated, the better their milk. Happy cows produced delicious milk and cheese and butter.

I was thinking about this not only in the context of factory farms, which are the complete antithesis of how Zoar residents treated their animals, but also in the context of several things that happened over the past few days and weeks with animals being tossed from cars.

Who could throw a living creature out of a moving vehicle? 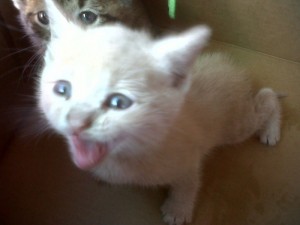 Don't throw me away! I'm not a piece of trash!

The first “throw away” animal was Fruit Bat, a 2-year-old chihuahua, who was found lying in the middle of a busy road, unable to move. The little dog was taken to Noah’s Ark by a good samaritan from Colony Cats. They estimated that the poor dog had been lying on the road for around twelve hours before someone decided to stop and help her. This sweet girl had a fractured foot and could not walk at first, but is now getting around in a cast. Despite all that she has been through, she still loves people and is happy and friendly. 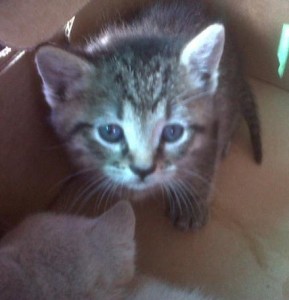 The second set of “toss aways” were two kittens, Stephanie and Hamilton, who were found along Hamilton Road. One of our volunteers, Kristin, was alerted when the branch manager of the bank she works with discovered the kittens. Workers at the bank are required to pick up trash off the property twice a day. While they were scooping up cigarette butts and other litter, they came across these two kittens, who are only 4-6 weeks old.

Just a few moments ago, Kristin was called because a van slowed down and dumped another kitten in the same location.

I am reminded of a t-shirt my dad wears. It shows a mother cat and kittens and says, “Don’t Litter. Spay and Neuter.” In this case, a litter of kittens was treated like actual litter.

And this is what got me to thinking about Gandhi’s quote and the folks at Zoar in the first place. What kind of world do we live in when living creatures are thrown on to roads like unwanted trash? I can only hope that rescuers and animal lovers are creating a refuge, a “Zoar,” for these babies and changing the world so that one day, these types of things will no longer occur.

One Response to How We Treat Animals…