Our Latest Kitty Slated for Transformation. 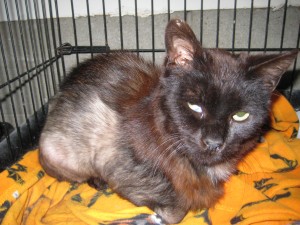 Just wait and watch. In a few weeks, with some TLC, I will be the "handsomest" cat around.

Poor Harold must be the saddest looking cat we have ever met. He came from our project with the lady who had the forty-five outside cats and needed to reduce her numbers to appease the county health inspector. She begged us to take this sweet boy, because she feared if he went to one of the large clinics at Capital, they would take one look at him and think euthanizing him would be the kindest choice. Since he was so nice, the lady did not want that to happen to him.

And Harold is very, very sweet. He also is missing most of the hair on his body and is probably partially or completely blind in his right eye. The lady told me that he was the only survivor of a litter of kittens born last year. And, indeed, this boy is still only a baby at eight months old.

When I first took him into the vet, I had no idea what was causing the hair loss. Not only was this baby bald, but he also had horrible diarrhea and a nasty upper respiratory infection. He was just about the most miserable looking creature alive. His “elbows” stuck out like skinny chicken wings and his tail looked like a crooked rat tail.

Dr. Murphy at the Spay Neuter Clinic felt the hair loss was probably due to stress, causing him to obsessively groom himself. She thought that in a calmer environment, the hair would return. And that is the case. Soft, downy black hairs are now starting to grow in all over Harold’s body.

With his upper respiratory infection improving, Harold can now also breathe. But he just seems so exhausted. He is perfectly content to spend most of his day in his kitty playpen, napping, stretched out on a soft blanket. He doesn’t mess his cage up. He eats his dinner, uses his litter pan, and crawls back in his warm spot to sleep.

We named him Harold so we could nickname him “Harry.” We thought that would bolster his confidence and help him to grow his hair quicker. A bald cat can’t be named “Harry,” so to live up to his name, he would need to sprout hair. Anyway, that’s the plan–we gave him a name he could aspire to.

Harry has been with us for about two weeks now and he is beginning to blossom. Out of all the cats the lady had, he is the friendliest. He loves to be held and will lay in your lap forever getting his belly rubbed.

While Harry has been growing strong and beginning his transformation from meek to mighty, we’ve also been continuing our efforts with the other cats he left behind. So far, almost fifty cats have been spayed and neutered. Of those, nearly half have gone to our local shelters or found barn homes.  Additionally, six litters of newborn kittens, or about fifteen squirming babies have gone into foster care with the Union County Humane Society. Many of the female cats that were spayed also were pregnant. If we had not stepped in, we figure that 12-15 litters of kittens would have been born on this lady’s property just within a month, doubling the number of cats.

It is overwhelming to think about. Within a month, she would have had almost 100 cats and kittens. As it is, she definitely had more than her estimated forty-five. We think there are ten remaining that need to be fixed and that puts our total number right around sixty that were on the property before we came along.

Harry will remain with us until he is sleek and shiny, his coat lustrous, his body healthy. And then we will find him a wonderful home where he will never be so stressed that he licks away all his hair.

Keep your eyes on this blog, we’ll be showing you Harry’s transformation as it progresses. We are the kitty fairy godmothers, waving our wands of good health, as we chant, “Bippity Boppity Boo.”

One Response to Our Latest Kitty Slated for Transformation.