Update on Bean Bag (our Broken Jaw Kitty) and Friends. 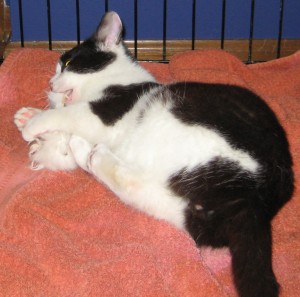 Bean Bag puts a toy mouse in his mouth. Even when his jaw was broken, he tried to eat and chew on his toys. He is a survivor.

I just wanted to let everyone know how Bean Bag and his family are doing. This little guy is definitely a survivor with a huge will to live. Even when his jaw was broken in several places, he was eating and chewing on his toy mice. Dr. Klein did fix his broken jaw and then last week, filed down one of his teeth so it would fit better in his mouth. Dr. Klein said he will never have a perfect bite, but he will be able to do everything he needs to with his mouth and not notice much difference.

While Bean Bag was under having the tooth filed, Dr. Klein also neutered him. In addition to his other jaw problems, Bean Bag also had only one descended testicle (making him a cryptorchid) and Dr. Klein had to go in through his abdomen to do the surgery.

Besides the broken jaw, the trauma to Bean Bag’s face also caused his right eye to be injured and he will be blind in it for the rest of his life. However, neither the blindness or the broken jaw have ever slowed him down. He runs and jumps and plays like a normal kitten. He just exudes such joy.

When I first reunited Bean Bag with Apple Seed, who we think is his brother–they look exactly alike with Bean Bag being the “Mini Me” version of Apple Seed–they immediately jumped on each other and began wrestling happily. I had to pull them apart because I was afraid Bean Bag would hurt his newly restored jaw. 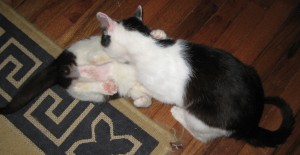 The boys wrestling. As you can see, nothing slows down Bean Bag, even though Apple Seed is twice his size (Bean Bag is pinned in this photo--those are his legs in the air squirming).

The same thing happened when they all were together again, with Cat-cus now thrown into the mix. No one hissed. No one acted as if they did not know each other.  Instead, Cat-cus went up to Apple Seed and began licking him. They promptly laid down with their head resting on each other. 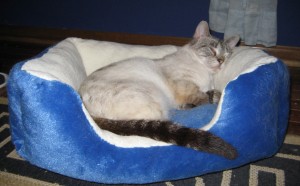 I would love to see two of these babies adopted together. Actually, my great wish would be to keep the little family of three together. While I know that is a long shot, these three are just so happy together that it makes me laugh and smile every time I am in the room with them. They certainly know the secret to a happy life. 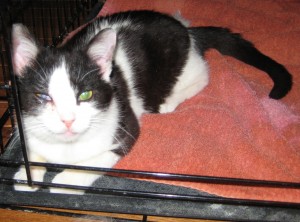 Bean Bag says, "Come on, you know you want me. I will always look like I am winking at you."