And Here He is (Looking a Little Rough), Our Bean Bag!! 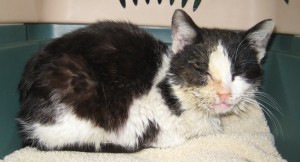 He doesn't look too spiffy right now, but at least he is no longer covered in blood!

I went to pick up Bean Bag today from East Hilliard Veterinary Services where Dr. Tom Klein is the dental veterinarian guru. Bean Bag looks a little less than stellar in these photos, but he honestly looks better than the first time I saw him when his entire face was covered in dried blood (I didn’t look at him too long at that time, because I was horrified).

Anyway, I promise to take more photos as our little guy progresses. We think he and Apple Seed are brothers (they look exactly alike), but there is at least a four pound difference in their weight. I wonder if maybe Bean Bag’s jaw had been broke longer than we first imagined and he was basically starving to death, thus his deficient body mass. As Dr. Klein told me, he looks to be three months old, but is actually seven months old, the same age as Apple Seed.

Bean Bag is now at Noah’s Ark where he will spend the weekend. Next week he will see Dr. Klein again for a check up and perhaps another simple procedure. He is allowed to eat soft food and will be getting a bath so he will start to look like an actual kitten and not a dirty smear of fur.

As a side note, Bean Bag does have eyes–he just kept shutting them because of the flash on my camera.

Everyone at East Hilliard Veterinary Services loved Bean Bag and there may even be someone there who wants to adopt our little survivor. Keep your fingers crossed for this sweet baby, who was kneading his paws and purring in the carrier as soon as I began talking to him. After all he has been through, it is hard to believe he still seems so happy–but perhaps he knows the secret to happiness–being grateful for all the blessings in your life. He has certainly experienced a bushel of blessings this week.

I know I'm not much to look at now, but just give me a few weeks. You won't recognize me after I get on the B and O Recovery Program.

Apple Seed, who looks to be Bean Bag's Twin, but is twice his size.