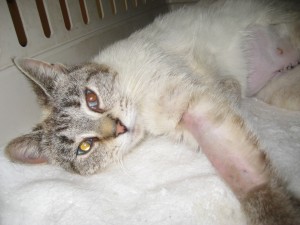 Cat-cus, a play on “Cactus” too emphasize “Cat.” Leave it to Dr. West to choose a name we can hardly pronounce!

The cats from the construction site are all on the path to a happy life. At last. These cats deserve to find a home of their own after being abandoned and watching the house they lived in be torn down.

Little Apple Seed is recovering from his upper respiratory infection and having a ball playing with his toy mice. He will go in next week to get neutered and vaccinated once he is completely well.

The lynx point Siamese girl went to Noah’s Ark on Monday to get tested. She was negative for feline leukemia/FIV and spent the night to get spayed on Tuesday. Dr. West called me after the surgery to tell me that our Siamese girl’s uterus was a mess and she thought that some time in her short life, she had had kittens. Light bulbs went off in both our heads. Was she the mom to the two boys? Dr. West put her age at around a year, while Apple Seed appears to be about 6-7 months old. He and Bean Bag (who Dr. Klein said only looked to be 3 months old in terms of body size, but was actually 6-7 months old when he looked at his teeth) could be her first set of kittens when she went into heat at 6 months old. She is actually just as small, if not smaller, than they are, so we, at first, thought she was one of their siblings, not their mom.

Dr. West decided that since the boys were “A” and “B,” becoming Apple Seed and Bean Bag, that the lynx point girl had to be a “C” name. Thus, she came up with the name “Cat-cus,” a play on “Cactus,” to emphasize “Cat.” The office staff has told her she is not allowed to name any more cats.

Miss Cat-cus is doing well and is now in foster care where she will relax and gain her strength before we begin looking for her forever home.

And now to our broken jaw baby, Bean Bag.

I had a phone call from Dr. Klein yesterday. Dr. Klein is the feline dental specialist who worked on Naomi’s mouth. I’ll also tell you what he had to say about Naomi at the end of this posting. Bean Bag had at least four fractures. There was also a split in the roof of his mouth because he was hit so hard. Dr. Klein and his vet resident wired Bean Bag’s jaw together so it could heal and then they bonded his teeth on one side so he could not open his mouth. They put a feeding tube in the opposite side so he could be fed.

This little guy is such a spitfire (remember, he was trying to eat hard food and play with a ball in his mouth even with a broken jaw). Dr. Klein said he came in the next morning to check on Bean Bag and he had pulled the bond apart and was happily opening his mouth. Dr. Klein said he had to be a strong little kitty to do that. They were going to re-bond his mouth yesterday afternoon and today he was going to return to Noah’s Ark for a prolonged stay.

Dr. Klein says he thinks he will heal just fine.

Dr. Klein also updated me on Naomi. Naomi, it seems, had not just one hole in the roof of her mouth, but three. One of the holes healed on its own. The second one was the one Dr. Klein put a flap of skin over to close it. The graft did not hold and so yesterday, he went back in and was going to put another piece of skin over the hole. That’s when he discovered the third hole. As he cut into the skin to make a flap to cover the original hole he had tried to fix, he noticed that he was not hitting bone, but air. The third hole had a piece of skin over it already and thus he had not discovered it until then.

Since he didn’t want to open up the third hole, Dr. Klein used a few stitches to repair the original hole. He is going to order a “septal button,” which will fit up into the hole and keep materials from passing from Naomi’s mouth into her nasal passages. The septal button is used in human babies with cleft pallets who are too small for surgery. This piece of material will remain in Naomi’s mouth the rest of her life. Dr. Klein said he has used this in two other cats. One cat has had it for 9 years with no problems. We are hoping the same will be true for Naomi.

I am always so amazed at how resilient cats are. Sometimes one dose of an antibiotic seems to work miracles for them. Bean Bag, Cat-cus, and Naomi are truly examples of creatures who value life and want to live. We can all learn a lesson from them.