In August of 2008, I helped our vet tech at Northstar Animal Hospital find a home for a kitty she had rescued from her brother-in-law after he tried to kill the cat with a 12 gauge shot gun. Ginya was keeping Miss Dolly, a gorgeous long haired dilute calico, at Northstar, where she roamed the offices doing as she pleased. But Ginya wanted to find her a wonderful home after the horror she had come from.

So I posted Dolly’s photo on our Petfinder site, thinking it would not take long to find her a home since she was declawed and very loving. An application came in, not for Dolly, but for two kittens we had at the PetSmart on Sawmill Road. When I began my initial background check on the potential adopter, I learned that her lease required that she have a declawed cat. Since we do not believe in declawing with Black and Orange and the two kittens did still have their claws, I began trying to figure out which declawed cats we had that might be suitable. Miss Dolly instantly came to mind.

I contacted Ginya and she wanted to make sure this was a really good situation considering all that Dolly had been through. I called the adopter and she did not know about the declaw portion of her lease. She was willing to adopt another cat that was already declawed and she and Ginya began making arrangements to meet.

Everything else on the application looked great. The adopter was a police officer. She had a younger son, but he was only with her every other weekend. Ginya wanted to make sure that the son seemed mature enough to be around Dolly, so she also met the son and the adopter. The adopter did not have a vet, because she had no other pets, so she agreed that she would just continue to bring Dolly to Northstar so she could see Ginya.

After Dolly had been in her new home for a few days, I made a home visit to check on her. The apartment was clean and Miss Dolly was clearly at home. She sauntered around the room, sniffing at a vase of fake flowers and watching television with the adopter’s son, who was having his lunch at the coffee table. All seemed peaceful and happy.

I took photos while I was there and sent them to Ginya, telling her that this was a very good situation for Dolly and she did not need to worry about her any longer.

I didn’t think any more about Miss Dolly until March 12 when I had an email from another rescue group, telling me that they had one of our cats. What? Surely there was some mistake.

The email informed me that a lady had brought in a cat that she had adopted from Black and Orange. The rescue group told her she should contact us, as we would want to get our own cat back, but the woman did not want to do that. Since they were afraid the woman was just going to dump the cat if they did not take her, the rescue group let her relinquish the cat to them, even though they were full.

That cat was Miss Dolly.

The email further stated that the woman said she had no time to care for the cat and that her daughter was “not nice to the cat.”

Okay, hold on a minute. Daughter? There was no daughter. Only a son.

After getting the email, I immediately wrote the rescue group back and explained that Dolly was posted on behalf of Ginya and I would need to contact her about Dolly, since I knew she would want Dolly back. I also did a bit of investigating to see if there were things I was not remembering. Was there a daughter? No, looking back through my records, I found the application which only mentioned a son.

The next email from the rescue group was even more upsetting. It said that the adopter had actually “surprised her daughter who didn’t know Mom was listening outside her room. The daughter was physically abusing the cat. Teachers at school had told her the child was a bit of a bully, but she didn’t realize how bad the kid was. Mom was crying and distraught and felt the best thing for Dolly was to get her out of the home asap.”

The email further said that Dolly was nervous, but after evaluating her, the rescue group felt she would come out of it and be fine in a few days. Kindly, they agreed to keep Dolly until we could figure out what Ginya wanted to do. Ginya had, in those two years since Dolly was adopted, taken a job at a vet clinic in another town and was no longer in the Columbus area.

When Ginya finally spoke to the other rescue group, it became clear that the daughter was actually torturing Dolly in ways that they did not want to go in to in too much detail. The cat, however, was obviously very scarred and traumatized. The rescue group agreed that they would keep Dolly and try to find her a home until Ginya could make arrangements to get her back in at the vet clinic where she was now working.

I felt terrible after hearing all of this. Obviously the daughter was from a new relationship that the adopter had entered into. How could I have known that Dolly would be placed in danger? I checked everything out so carefully. 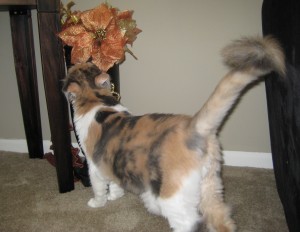 But the worst news came just this week. Ginya wrote me to tell me that she was finally going to be able to take Dolly back. The vet clinic was empty so there was room for her. She had called the rescue group that had Dolly, very excited about getting her beloved cat back, the very first animal she had ever rescued.

Just after that happy email, I had another email from Ginya telling me that Dolly had died from the whatever had been done to her by the adopter’s daughter. She had kidney failure and elevated liver enzymes and she could not be saved. Ginya further told me that one of the rescue group’s volunteers had quit because they were so upset by what had happened to Dolly.

Ginya, of course, is distraught. Both of us tried so hard to make sure this was the perfect home for Dolly. How can I ever know that a situation will be okay for a cat we adopt out 2 years, 5 years, or 10 years down the road? How can I know that new people won’t enter a cat’s home and harm it? How can I ever trust myself with such an important decision–placing a cat in a home where its life depends on my instincts and judgement?

While I know I cannot foretell the future, that I am only going by the information I have on hand, I still feel deeply saddened by what happened to Miss Dolly. She deserved so much more. She deserved a life of happiness and ease after all she went through. With every cat we place, I try to make sure that is what they get. I am so sorry I made the wrong choice for Dolly.

With all of this on my mind, I sent an email to Dolly’s adopter trying to figure out what was going on. She immediately wrote me back, telling me that she didn’t have a daughter and that she had only relinquished Dolly because she was working a lot of overtime and did not have time for her. She said she felt bad because Dolly was alone most of the time. She emphatically stated that neither she nor her son had ever hurt Dolly. Could there be a mistake? A mix-up? Might the rescue group be talking about another cat?

Hope sprang anew. Perhaps Dolly was not dead!  An error had been made.

And so I sent over Dolly’s photo, asking if they were sure this was the same cat. I also forwarded the emails from the adopter. But once again I got the same story. And once again I was assured that Dolly had died.

What to make of all this. Was Dolly abused? Was there a mistake? We probably will never know, but my heart goes out to that poor cat. Finally, though, she is in a place where she will be at peace. 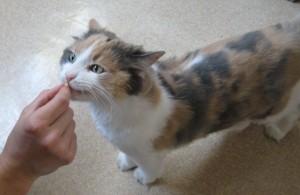