Miracle now that she has had food and love.

I just wanted to give everyone some new information on our little Miracle girl. As you can see in the above photo, she looks so much better and healthier than she did when she came to Debbie at the end of February. Miracle was the little orange kitty who was dumped at one of the local metro parks. She has since gained weight, almost doubling in size from 4 pounds to 7! Her weight increase is thanks to lots of love and TLC from Debbie and high calorie kitten food. 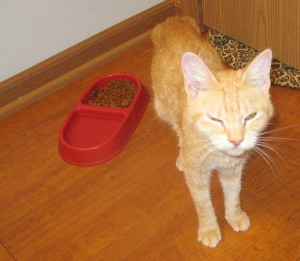 Miracle before she gained weight. She weighed only 4 pounds when Debbie first rescued her.

Debbie also took Miracle in to see Dr. West, who discovered that Miss Miracle was front paw declawed. In fact, Dr. West thought the declaw surgery had been done fairly recently. This makes us wonder even more about why someone would get a cat declawed and spayed (she was already fixed) and then go and dump the cat in the woods. Was there foul play at work? Did someone steal someone else’s cat?

Debbie was shook up to find out that Miracle had been left to survive in the park with no claws to defend herself. She called Capital and checked on the Pet FBI web site to see if anyone was missing a declawed orange tabby cat, but found nothing.

Happily, Miracle is now ready to find her forever home. This home will be one that needs and wants a miracle. 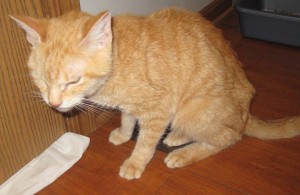 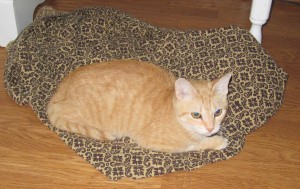