Who would leave a cat to fend for itself?

Yesterday, Saturday, was our monthly PetSmart adoption event at the PetSmart on Sawmill Road in Columbus. Toward the end of our event one of the pet food vendors, who works in the store, came over to us carrying a giant, fluffy cat.

“Did a cat get out of one of your cages?” he asked.

We did a quick check, but the cat did not look familiar and all of our kitties were safe and secure within their dog crates. The same was true for the cats in the adoption center.

It quickly became apparent that someone had dumped the cat in the store. A visit to the grooming portion of PetSmart, as well as the Pet Hotel, revealed that the cat had not escaped from either place.

After a few words about what we should do with the cat, one of our volunteers took the Maine Coon kitty to Noah’s Ark to have Dr. West evaluate him. We also did our own quick check before he left and found the cat was front declawed.

After he arrived at Noah’s Ark, we found more pieces to our puzzle that just did not fit. First of all, his bladder was enormously enlarged, which frightened the staff at Noah’s Ark, because they were worried he was blocked and unable to urinate. But after providing a litter pan and a few other incentives, the gorgeous male kitty, peed a large volume and allayed their fears. What this meant, however, was that the cat had been holding his urine because he could not find a litter pan. He had been holding his urine so he would not make a mess and because he was so scared.

That changed our idea about when he may have been dumped in the store. If his bladder was so enormous and he had been trying not to pee, he may have been dumped at PetSmart either on Friday or sometime early Saturday or even earlier in the week. He may have crept around the store, hiding under shelving and behind pallets of cat litter, undiscovered until he was brought to our attention.

What we could not figure out, and still can’t, is how someone walked into the store with this large cat and no one saw them just leave him. Perhaps they had him in a cart and abandoned the cart and cat? We probably will never know. But the kitty popped out just before we were getting ready to leave for the day. Thankfully, we were late on our departure or he may have suffered a different fate.

We named the brown and gold Maine Coon, Skylar. A little boy had been visiting our kitties and left a donation for us. As he was leaving, his mom called him Skylar and it seemed like a perfect name for our abandoned kitty.

Skylar, we also learned, is already neutered, is only 1-2 years old, and is very healthy. Why someone would dump a declawed, young, and gorgeous cat is beyond all of us. But we are in the habit of rescuing cats, so, of course, the habits of those who leave their pets behind is a mystery.

Skylar will now go into foster care until we can find him a home where he will be safe and loved the rest of his life. The next time he appears at PetSmart, we hope it will be to get adopted, wiping clean the memory of his abandonment. 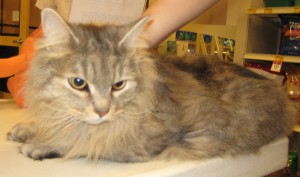 Who could leave this beautiful cat behind?