Many of you may have read the article in The Columbus Dispatch this past Sunday, March 21, entitled, “Third dog warden fired in less than 18 months.” While most of the story focused upon the firing of a well liked dog warden in Pickaway County, the final portion of the article brought up the issue of the Licking County Animal Shelter’s gas chamber. The dog warden in Licking County, Jon Luzio, and Licking County Commissioners routinely get complaints about the use of carbon monoxide and the gas chamber to euthanize animals. As the article stated, the commissioners decided to abandon the gas chamber in favor of lethal injection, a much more humane practice, to euthanize animals in the shelter. They planned to be using lethal injection almost exclusively by April.

However, the gas chamber would still be employed for overly aggressive animals.

The Newark Advocate also reported on the change in the method  of euthanization in a March 18 article by Amy Hollow. The article cited increased pressure from the public as the main factor in the commissioners’ decision to phase out the gas chamber. Some of that pressure came in the form of a facebook page and an email campaign that filled the commissioners’ in-boxes with several hundred notes asking them to get rid of the gas chamber.

I received the email on March 17 asking everyone to participate in “Operation Email, Blast the Gas, Thursday, March 18.”

I also had another email just today asking everyone to participate in another email blast tomorrow, Thursday, March 25, due to the fact that the gas chamber, which was supposed to no longer be used, was once again used to euthanize the little dog who is pictured at the beginning of this article. The dog, who had a rescue who had agreed to take her, was deemed “aggressive” even though she was just very scared in the environment she was in.

The rescue group pleaded for her life, saying: “She is just afraid. Please try to get her out of there. Boiled chicken usually works. I’ll work with her when she gets here. Please don’t let her be gassed. Can someone help? I don’t want her to die. Please…”

Before the rescue group in Michigan could save her life, she was placed in the gas chamber.

I am asking everyone who reads this blog to take part in the email blast tomorrow. Since just banning the gas chamber has not seemed to work, they are asking that people ask for the gas chamber to be completely removed so it cannot be used at all. From the email I received, here is what you need to do:

Who: You and at least 5 or more other people (please copy and paste this and email it to several of your friends so they can participate) need to send emails from your own email accounts.

How: Send emails to the Licking County Commissioners asking them to please end the use the gas chamber.

Please also add a “bcc” to getridofthegaschamber@gmail.com for each email you send so they can see how many emails were sent.

Do not put anything about the gas chamber in the subject line, but in the body of the email ask the commissioners to please end the suffering of animals through death in the gas chamber. Ask them to completely remove the gas chamber from the Licking County Animal Shelter so it cannot be used again to kill animals. Please send several emails on March 25.

Animals suffer in gas chambers. It is a gruesome and horrible way to die. I first learned about gas chamber use through a book about a dog who actually survived being gassed.

For those of you who may not know, there is an excellent book about the dog who survived the gas chamber in St. Louis. Quentin, a reddish brown mutt, was led into the St. Louis pound’s gas chamber in August 2003. When a shelter worker opened the door at the end of the procedure, the dog was still alive, standing atop the bodies of the six dogs that had been led in with him.

Quentin was subsequently taken in by Randy Grim, the founder of Stray Rescue of St. Louis. Quentin has become the poster pup for ending gas chamber use as a form of euthanasia. Grim went on to write an excellent book about Quentin and the use of gas chambers in animal shelters across the United States. Miracle Dog: How Quentin Survived the Gas Chamber to Speak for Animals on Death Row documents the plight of many shelter animals.

You can read more about Quentin in an excellent National Geographic News article which also explains how the gas chamber works. And to find out more about Quentin, Randy Grim, and Stray Rescue of St. Louis, visit www.strayrescue.org 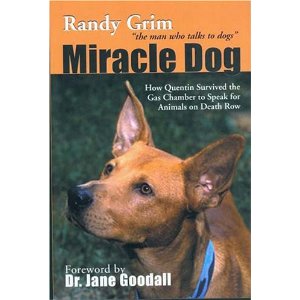 While Quentin luckily survived the St. Louis gas chamber, the little dog pictured at the beginning of this blog entry did not survive the Licking County Animal Shelter’s gas chamber. Thousands of others over the years have also not made it out alive. Please help to end this cruel practice by taking part in the email campaign on March 25.

Posted in Animal News (other than cats), Events