Koko says, “Show Me the Money.” 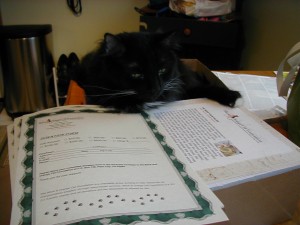 Yes, I think this will work nicely. It reads well. Could you fetch my eye glasses, please?

Kristin has been getting a mailer ready to send out telling about Naomi’s dental surgeries for people who may not receive our emailed newsletters. While she was stuffing envelopes, she had a bit of help from Koko. Unfortunately, Koko turned out to be a real slacker and had to be fired from the job. It’s hard on the paws, he complained. 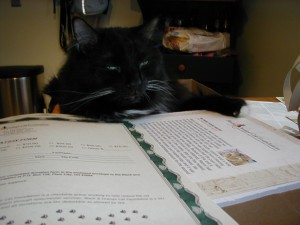 By my left whisker, I do believe my mom did a great job with this. I give it my stamp of approval. One paw up!

Eventually, the job just became too much for him and poor Koko took a break inside the envelope box, which, by the way, makes a very nice bed. 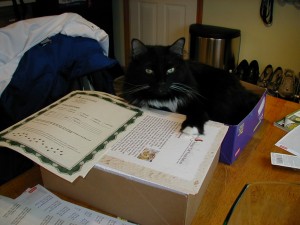 This is my envelope box. Don't even think about taking it away from me.

We want to thank Kristin and Koko for all their hard work to help raise money for Naomi’s surgeries. Koko has also agreed to act as “enforcer” and “hit cat” if anyone fails to make good on their pledge of support. You may wind up in an envelope box, too, if you make Koko mad (and we doubt you will fit in it as well as Koko does).

Posted in Daily Life of a Rescuer