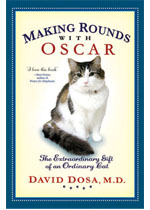 I first read about Oscar the cat and his strange abilities to predict when a person was about to die in 2007 when Dr. David Dosa published an article in The New England Journal of Medicine. The article detailed the odd things occurring at the Steere House Nursing and Rehabilitation Center in Rhode Island when Oscar crept into a patient’s room.

Oscar, who was not the warmest and friendliest cat to the residents living in the Alzheimer’s facility, would become their guardian and protector as they approached death. The cat would enter the patient’s room, curl up on the bed beside them with a contented purr, and not leave until the undertaker arrived. Oscar comforted not only the dying person, but their family members, as well.

After his extraordinary article, Dr. Dosa went on to write a book about Oscar which was just recently published. Making Rounds with Oscar details not only Oscar’s abilities, but looks at life in a nursing home through the lens of those dealing with the traumatic events associated with Alzheimer’s.

To find out more about the book and Oscar, visit Dr. Dosa’s site: Oscar the cat.

Here is the article I wrote in 2007 about Oscar’s uncanny abilities, as well as those of my cat, Oswald.

The Uncanny Sensibilities of Cats

I’ve always thought that my cat, Oswald, had a sixth sense that allowed him to know things that were well beyond my range of knowledge.

One spring, when Oswald was little more than a kitten, I was home with him when a terrible thunderstorm began to churn outside.  While the wind whipped against the windows, Oswald suddenly seemed to get anxious about the weather.  Meowing loudly, he came to me and refused to be quieted even by soothing head scratches.  Finally, as he went back and forth from me to the door leading from the living room, it seemed that he wanted me to follow him.

Oswald only ended his persistent pacing and yowling when I allowed him to lead me to the basement.  Once there, he was silent and sat patiently in my lap for several minutes.  Then, for no apparent reason, he leaped up, went back to the basement door, meowed to be let out, and calmly went about his business, bothering me no further even though the storm still howled around the eaves.

I can only think that perhaps there was a tornado close by and Oswald led me to safety until the danger passed.

Oswald also seems to see and hear things that do not register in my consciousness.

I have often noticed Oswald gazing at the ceilings or past my head as if he can see something floating in the air.  Dust mites, maybe, or something more celestial?

Someone once asked me if I thought cats could see angels.  The intensity of Oswald’s gaze leads me to believe he is looking at something completely unearthly.

Additionally, Oswald will go running for the back door long before I hear the garage door opening, signaling Joe’s arrival home.  Oswald always hears noises before I do and his behavior notifies me that someone is in the driveway even when I am clueless.

Probably Oswald’s most endearing quality, however, is his loyalty when I am sick.  He will crawl up on the bed beside me and he will not leave me during the entire duration of my illness.

Sometimes he lies beside me so I can touch him.  Joe and I have often joked that Oswald is like a sponge for our stress and unwanted emotions.  We hold him after a rough day and he soaks up our bad thoughts, removing the toxins from our system, leaving us calm and peaceful.  We worry that some day all our pressures, pulled into his furry body, will leave his system riddled with tumors.

Sometimes Oswald lies at the end of the bed when I am sick, as if he is guarding me.  He does the same thing at night when I am sleeping, as if he is protecting me from some unseen evil.  I remember reading a story that said cats used to be the guardians of their humans, “cat-napping,” gazing out with eyes closed to narrow slits, alerting their beloveds of impending danger.  Does Oswald watch for things that might harm me; things I cannot even see?

I began thinking about how bizarre Oswald, and all cats I’ve known, acts after reading an article in The New England Journal of Medicine.

The essay, detailing “A Day in the Life of Oscar the Cat,” describes a cat with highly unusual powers.  Oscar can predict a human’s death.

Oscar, a two-year-old feline, lives on the third floor of Steere House Nursing and Rehabilitation Center in Providence, R. I.  This floor is the dementia floor of the nursing home and the patients in this area are often confused, having forgotten much about their lives.  Normally, Oscar is not overly friendly to the patients, who although ill, are not close to dying.  He hisses and seems to warn them to stay away, perhaps a protective measure to keep the cat safe from people who can sometimes become aggressive or harmful because of their dementia.

Each day, Oscar makes rounds of the rooms on his floor, checking every patient.  If they are not approaching “their time,” the end of their lives, Oscar moves on.  But if Oscar enters a room and the person is about to die, he will stay.  In fact, Oscar jumps up on the bed beside the dying patient and does not leave them, purring and nuzzling them, cuddling next to their bodies.

According to Dr. David M. Dosa, the author of the article, Oscar has predicted the deaths of more than twenty-five residents.

The nursing home staff recognizes that when Oscar is present at a patient’s side, death is approaching.  They call family members and make final preparations.

Oscar always stays until the person dies.  Then he goes on about his business.

Oscar has his own plaque for his work with patients who might have died alone if not for his furry, friendly body next to them.  The plaque, from a local hospice, reads: “For his compassionate hospice care, this plaque is awarded to Oscar the Cat.”

While my cat, Oswald, has no plaques honoring him and has never predicted a death, he does have much in common with Oscar.  Both cats seem to have an uncanny awareness about the workings of the world; an awareness shared by most of the feline population.

I can only hope that Oswald will continue to protect me and that one day, when one of us dies, the other will be there either in spirit or flesh.