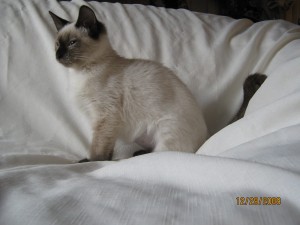 For the past several months, we’ve been working with a very nice lady, Judy, who lives next to a nature reserve/park-like area where tons of cats get dropped off quite frequently. Judy had taken in four litters of kittens since the summer from pregnant, dumped mother cats that found their way to her yard seeking food. Emily came from one of those litters.

As Judy wrote and told me, “A stray, timid Siamese mother brought her kittens, three sisters, to our deck this fall to wean them with the food we leave there. They were pretty sickly and their eyes were crusted over — I almost stepped on two of them as I was mowing the lawn. And Gracie, the little gray one, was stuck in the mud amidst some chickenwire that was holding a bush together. She didn’t move when we approached, and with her coloring blending with the mud, we almost didn’t see her. She was the smallest and sickliest, so I took her to my local vet for testing and meds right away. These three sisters were on three rounds of antibiotics before they were really well.”

Emily was one of the kittens that Judy almost ran over with the lawnmower. Her siblings Gracie and Camille are still looking for their forever homes, even as Emily is being spoiled rotten by her new mom in Virginia. Yes, that’s right, Emily is now enjoying the good life with her Balinese older brother Kamarre near Richmond, Virginia.

So how did we get Emily to her home in Virginia? It all came about because I wanted to find Emily the best home ever with someone familiar with Siamese. Since I volunteer with Siamese Rescue, I knew about a site called Siamlist (www.siamlist.org), where people and rescue groups can post listings for Siamese kitties. I submitted Emily’s info to the site and within just a couple of days had heard from Siamese lovers in Missouri, Minnesota, Indiana, and Virginia. Now the big question was who was the best applicant and how exactly was I going to get Emily to them?

Lynne, Emily’s new mom, was just wonderful in all the emails we exchanged. And her vet had known Lynne for years and could not say enough good things about her. So a trip to Virginia looked in the works. Lynne was more than willing to meet up with us halfway, and I know if needed, she probably would have driven the whole way, but she was eight hours from Columbus–not a pleasant trip for anyone to try in one day with a kitten in tow.

I asked a few people I knew about transporting and then began investigating the shortest trip and routes. To divide the trip in half, so that each person would only drive four hours one way, I mapquested a location in Beckley, West Virginia, straight off major highways for Lynne and Emily’s transporter. I also had to look at the weather for the coming week to make sure that no one on either end of the trip would run into nasty snow or ice.

Once I began talking to Judy about the trip, she decided that she wanted to take Emily so she could meet Lynne and see her little foster off to a good life.

Here is Judy’s account of what turned out to be a very uneventful (thank goodness the weather followed what the reports said!) trip: “Although I have a lot of  experience transporting cats by car for trips that were a couple of hours long, I’ve never taken a cat on a long day trip like this–considering that Emily had about four more hours to go with Lynne, and after we’d already had Emily in our car since 6:30 am. I did a little research online and got a few tips to try to get tuned in to what the issues might be for Emily. Emily had done so well when I drove her to Plain City on the day of the clinic, so I was kind of surprised that as we began the trip she was very restless in her carrier. We stopped and for awhile I had her on my lap (I wasn’t driving), but she was still very restless. So then I thought perhaps she needed to use the litter box. So we stopped again at the next rest area and tried that, but she didn’t use the box. She went back in her carrier on the back seat (with our dog, who goes with us on longer day trips) and she slept for a long time then, crying occasionally. About thirty minutes before meeting up with Lynne, we stopped and tried the litter box and water again. But she wanted none of that.

“When we met up with Lynne, who seemed, like me, very focused on the fact that Emily was going to have an overall very stressful day, we were both geared to getting things done so that Lynne could get back on the road to get Emily home (we got there around 11:40, but Lynne had arrived before us and was re-fueled and ready to get on the road).”

Lynne checked in, too, to let us know that she and Emily had made it home: “The drive home was uneventful. We had lunch at Arby’s in Lewisburg and then I stopped to stretch my legs in Waynesboro. Em ate about 1/2 oz of roast beef, but licked a lot of water from ice cubes I got for her in her water. She licked my fingers, received kitty scratches and petting, took a bath, and passed out for the rest of the trip!”
Lynne continued, “It’s almost like she knew this was going to be her forever home. Kamarre checked out the carrier, hissed, and whined. Now they’re both exploring the living room.”
And that, my friends, is how we do happily ever afters, even when they require road trips. I want to thank Judy and Lynne for both driving over eight hours in one day to give Miss Emily her happy ending. 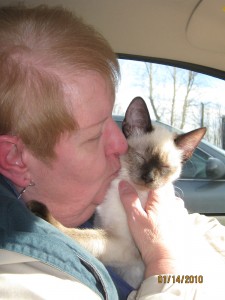 Emily with new mom, Lynne, in the car in West Virginia.