A Wish for the Coming New Year. 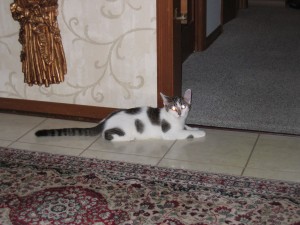 Our Winston when he was just a baby.

I was going back through old photos today and I found this picture of Winston when he was just a baby in 2004. Yes, Winston has been with me and Black and Orange Cat Foundation for his entire life, going on six years. I rescued him and his brother from a busy factory/lumber yard in Plain City. His mother had given birth to half the cat population in the area until we were able to get her fixed and into a home.

It was only about two years ago, however, in 2007, that I decided my home was not the best place for Winston to live. A cat he lived with suddenly became very aggressive and tried to establish his dominancy and poor Winston was the one he took all his hostility out on. I would find Winston cowering under furniture. He would only eat when all the other cats had finished, acting as the clean up guy. Winston had always been a long cat, but once he became anxious, he would eat when he had the chance and this anxiety eating caused him to gain a lot of weight. Whenever we take Winston to PetSmart for adoption events, people always comment on what a large cat he is. He is a big cat, but he only became overweight because of his anxiety. You can see in the photo that he was a normal sized kitten.

As a kitten, he had always been a bit more shy than his outgoing brother, but once he started being picked on, it was as if all the joy went out of his life. He hid constantly, scurrying around from one hiding spot to the other, always looking behind him as if he feared something would pop out and get him. I feel great sadness when I remember a time when we were alone in the kitchen, he and I, and I pulled out a toy to play with him. Momentarily, he forgot that he was the lowest cat on the feline totem pole in my house and began to leap with happiness in the air. But mid-flight, he suddenly hunkered back down and fled to a safe spot, his brief second of happiness now gone.

After finding Winston numerous times, crouched in terror with wounds on his neck and back from being attacked, I decided I could not let this continue. I tried confining Winston in a spare bedroom to keep him away from the dominate cat. He hated being locked up by himself, though–he liked the other cats–and would always try to escape. I tried confining the dominate cat, but Winston never calmed down, always thinking the other cat was nearby. I used Feliway and other tactics, but sooner or later, things went back to Winston getting attacked and I could not handle that. So finally, I had to send him to live with another family member where he would no longer be picked on.

I saw Winston and his best buddy, Suzy, on Christmas day. When I went in the area of the house where he and Suzy stay, he came running out to see me, as did Suzy. They have both blossomed since they left me (Suzy was also tormented by that same dominate cat and being deaf in one ear, she was always in a panic). They wanted to be petted and rubbed around me for a back scratch. They both love to be brushed. 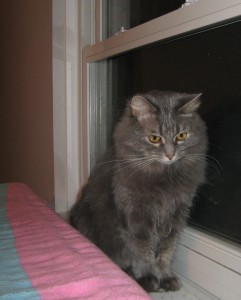 Miss Suzy sits by the window, waiting for her family to arrive.

I know that if these two could only find their forever home, a quiet place where no one minded that they were a bit shy and would need time to adjust, they would become the friendliest cats ever. Winston already likes to crawl in your lap to be petted. With time and the knowledge that nothing was going to hurt them, both he and Suzy would be super companions for someone who would give them a chance.

I want so badly for these two to have that chance. They so deserve happiness and love and a home that is their own–not just a place to stay for awhile. When we take them to PetSmart, they are so scared that no one ever sees their true loving personalities. And although they’ve been posted on Petfinder for the past two years, they keep getting overlooked.

My wish for 2010 is that these two will finally go together to a loving home where they will be the favorite cats; where they will be the ones who get all the attention; where someone doesn’t care that they aren’t cute kittens or needy lap cats; where someone will say, I am doing this for the cats, so I want to adopt the ones no one else has wanted. 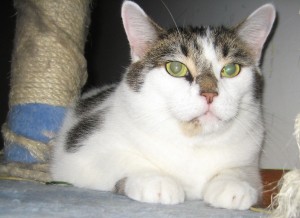 Winston today. He has lost weight since he is not the clean up guy any more in an anxious situation.

Winston breaks my heart, because I feel like I caused his unhappiness by placing him in the situation where he was picked on. Because of that experience, he is still wary of new people and places. And that shyness continues to cause him to be passed over. So my wish for 2010 is that someone will see him and Suzy as I see them by looking at them through eyes clouded by love. 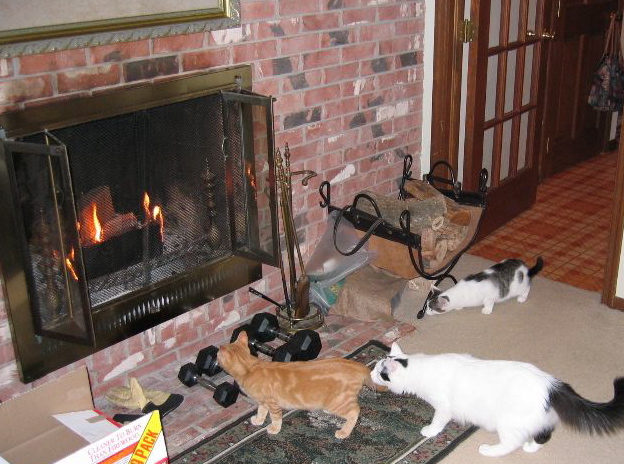 A younger and smaller Winston hanging with his brother, Booker (orange tabby) and friend Henry (who has since been adopted) by the fireplace before he began to be picked on.