Santa Paws Photos at PetSmart Event was a Blast!

Queen Jezebelle commands Santa to do her bidding!

We want to thank Santa Chuck for being the classiest Santa ever! We even had several PetSmart employees tell us that out of all the rescue groups who participated in the photos with Santa Paws event this year, we had the best Santa. And we have to agree!

We took over fifty photos with Santa. Pictures ranged from lots of happy dogs, some children, a two week old baby (and the proud black lab brother), several cats and even two guinea pigs.

No snakes this year, but we did have some roving guinea pigs!

The nicest story, however, was the dog from Afghanistan. A lady brought the dog in because he has been in a kennel for the past three months while his family, who are in the military, are away in Afghanistan. His family had actually found him while they were stationed in the country and shipped him back to the United States. Now he was just awaiting their arrival home for Christmas in three days.

Because he has been in a kennel this whole time, this very nice lady goes to the kennel (she is friends with the owner) and takes this good boy out for excursions to PetSmart and around town to allow him to see other people and dogs. She got his photo taken as a special present for his military family when they arrive home. To say he is one lucky dog is an understatement: saved from a country at war, shipped from Afghanistan to the U.S., and then loved by a family who paid any price to bring him to their country–one lucky dog, indeed. 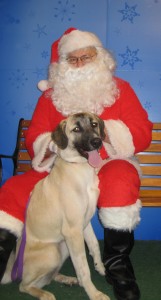 This lucky boy came all the way from Afghanistan to see Santa!

The award winner for the cutest pet, however, was the chihuahua in the pink coat with the drawn on eyebrows! Yes, her parents drew on eyebrows for her. Ultra chic!

Yes, you love my eyebrows, don't you?

After Santa was done with the photos with our adoring public, he kindly posed with each of the cats in the adoption room at PetSmart. When he asked them what they wanted for Christmas, they all unanimously agreed that they would like to find their forever families this holiday season.

Miss Jezebelle, our long termer and Queen, only allowed us to present her to Santa in her little bed. Jez loves to sleep in her cozy cube, so she could not be made to leave it on our silly human whim. We bundled her up like a kitty burrito and sat her on Santa’s lap. Please do think about giving this girl a home if you are looking for a kitty as 2009 ends.

We hope all the kitties at PetSmart get exactly what they wished for from Santa Chuck this holiday!

Santa assures Lydia that, yes, she will get her wonderful forever family very, very soon!