How do you find a home for a cat in a short amount of time? 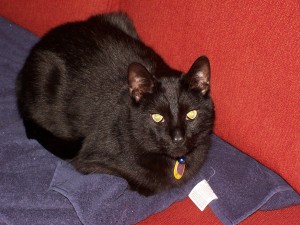 I had a desperate email from a friend of mine in rescue.  She had adopted a cat to a family seven years ago.  The family was now moving out of state and could not or would not take the kitty with them.  So now, a cat that they had had for seven years needed a new home.  Since my friend had originally adopted the kitty to them, they wanted her to find a new home for the cat.  Which would have been fine, except they were moving in 6 days.

This post is for Shadow, a seven year old black cat, who needs a new home by June 30. The family is moving and does not plan to take this older gentleman with them.

Shadow, unfortunately, has several things working against him.  While he is a very friendly kitty who has been microchipped, neutered, vaccinated, and is very healthy, he is also a black cat.  Black cats still get a bad rap and people too often want something other than a black cat when they are looking to adopt.  Secondly, Shadow is not a young kitten–he is older and has only known one family his entire life. Finally, Shadow doesn’t have much time–less than five days as I write this.

Unfortunately, we deal with this a lot in rescue.  Someone has to find a home for a cat right now and if we cannot find a solution, the answer may put the cat’s life in danger.

I have been upset with people who want to return cats after a year.  Thankfully, I have never had to deal with anyone we’ve adopted to who wants us to take a cat back after seven years.  It is something I hope I never have to do.

But that is beside the point.

The point of this post was to let everyone know about Shadow.  If you are looking for an older, lovely black cat, please send an email to us and I will put you in contact with my rescue friend.  Shadow needs a miracle right now.